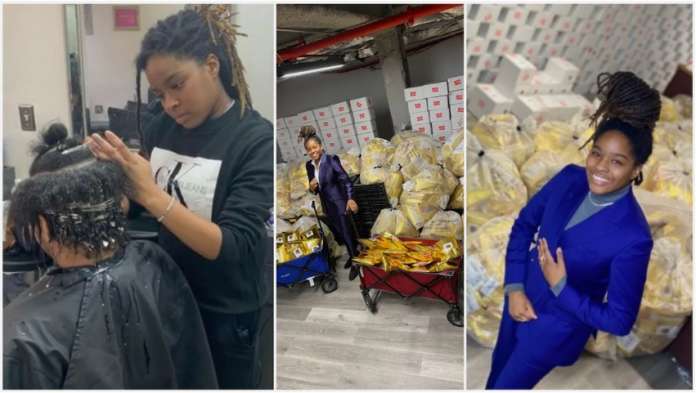 A lady with the Twitter handle @Nathelocgod has shown that there are people still reaping the benefits of hard work in a big way. In a Twitter post on Tuesday, November 17, the lady took to the social media platform to inform everyone that despite the fact that she became a hairdresser at the age of 17, she turned out to become a millionaire at 20.

One of the two photos she attached to the post showed her in a salon working on a client’s hair. In the second frame, she posed in her warehouse of hair products.

In response to people asking how possible her feat is, she added subsequent tweets that explained it all. She mentioned that she began practising the craft by braiding her hair and her mum’s at home.

Read also: Grass to grace: Man moves from Living in poverty to Schooling in Harvard University

The lady said that she now as her own salon and stylists working for her. She worked in a hairdressing shop for three years. When she became 19, she launched her product line.

With good fate on her side, her company picked off well and she had to leave her daily job as a hairdresser to become a CEO. Richer than ever, she was able to set up her own salon and employ a stylist in January 2020. It should be noted that the hardworking young lady has a 6,400sq foot warehouse, two salon suites, and 13 people working in her establishments.