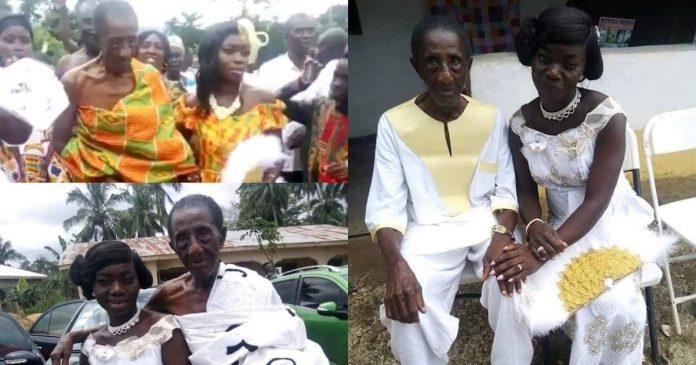 Wedding photos and a video of an old man and his bride have been trending on social media. It turns out the man is 106 years old while his wife is 35 years old.

The photos and video show an aged-looking groom and his very young bride at their traditional wedding.

In the video, the groom and bride were seen dressed in beautiful kente and dancing to Wendy Shay’s Akokora Gangster. While holding hands together, a group of people came to witness the union of the new couple.

Adom TV indicated in the report that the marriage ceremony happened at Maafo-Akwaboakrom in the Western region of Ghana According to Gyan Formula, a man who is said to be the son of the groom, his father is 106 years while the bride was 35 years old.

Gyan indicated that the two have been together for about 12 years and have four children with the eldest being 11 years old. Gyan revealed that his father works as a cocoa farmer and herbalist and he is still very strong. Explaining why his father was marrying at this age, the man stated that he had been worried about the fact that he will pass on without marrying the lady and would be asked by God.

See also: Mother inspires people, carries out paintwork as she backs her baby

On their relationship with their father’s wife, Gyan who is 41 years old stated that he and his other siblings have taken her as their mother. According to him, their mother passed away in 1999 and they have accepted the young lady since their father likes her and he is happy with her.