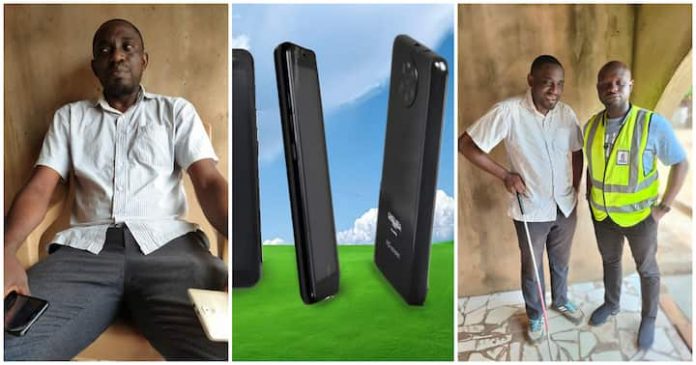 John Msughter is one of the many Nigerian youths that showcase the multitudes of talents that abound in the country.

The 44-year-old man, though visually impaired, designed and developed a smartphone he called Chelsea Mobile Mate 40 Pro despite not acquiring any university education.

John seeks partnership for mass-production of the phone

Showcasing the work of John on Facebook, a journalist who identified as his friend named Ukah Kurugh said that the Benue indigene is seeking partnership to mass-produce his phone.

Ukah explained that the said partnership would be of two folds. The first is for ”business-minded individuals for large scale manufacture of the mobile device” and the second for ”competent hands, in terms of technical know-how, to be part of the project and ensure its sustenance.”

The journalist revealed that seven units of the device have already been sold on pan-African technology company Jumia, with more units being requested.

With a capital of N250m, Ukah said John and his partners will be able to manufacture 5,000 units of the sought-after phone.

Quite interesting is the fact that the publicized Chelsea Mobile Mate 40 Pro is not the first phone the 44-year-old has designed. In a phone conversation with Legit.ng’s Victor Duru, John who hails from Kwande LGA in Benue state said he had, in 2019, product.

He revealed that the Chelsea Mobile which was produced in December 2021 is his second.

TheChelsea Mobile is a dual SIM device. Other features of the phone he highlighted to Legit.ng include that it has 2GB RAM, 16GB memory, 3000 mAh.

He has also patented his technology and registered his firm Chelsea Mobile with Corporate Affairs Commission (CAC).

How was John able to produce the smartphone without his sight? On how he was able to come about the Chelsea.

MobileMate and his other phone product despite being blind, John revealed that it’s all about imagination as he had always wanted to do something big and provide solutions to problems.

John told Legit.ng that he drew inspiration from Nnamdi Ezeigbo who is one of the brains behind fast-selling technology, Tecno.

WThe software engineer revealed that his family is well-grounded in ICT. John who holds two international certifications in programming and did java programming at MIT Lagos before going blind said he had the designs for how the phone will look and took it to a factory.

“Everything comes from imagination. I had the designs for the phone and took it to a Chinese factory where it was produced according to the specifications I developed.”

He hinted at his plan to develop a third phone for the blind. John lost his sight in 2018 to glaucoma and runs a foundation that tackles such – the John Lan Eye Foundation.