A 9-year-old has topped out the list of highest YouTube earners in 2020, making more than $29 million, according to Forbes. And this is the third year in a row that he’s stood at the top of the list.

Others on the list include Rhett and Link (third with $20 million), and controversial beauty guru Jeffree Star (10th with $15 million).

The third-grader, who lives with his family in Texas, gained notoriety for his unboxing videos when he was just four. A video of him unboxing and reviewing toys from the movie “Cars” went viral and garnered more than a billion views and Kaji’s “Ryan’s World” channel took off from there.

Unboxing videos, where kids review toys or games, have become enormously popular on YouTube, and thousands are uploaded to the platform each month.

Ryan’s success, say his parents Shion and Loanna Kaji, is because he’s able to create a special bond with his viewers. 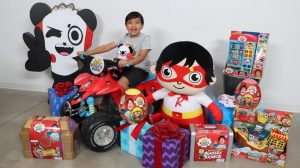 The Kaji family has been able to parlay their YouTube success into lucrative licensing, branding, and TV deals. The family now runs a 30-person production company called Sunlight Entertainment, which helps them produce the videos.

According to Forbes, the Ryan’s World name has been licensed to more than 5,000 products. The family also produced a line of merchandise for Walmart, and Ryan has his own shows on Nickelodeon and Roku.

This Thanksgiving a float of Ryan as his superhero alter ego, bounded through the Macy’s Thanksgiving Day Parade. And in early December, he launched a virtual world on the popular videogame platform Roblox.

All told, Kaji’s brand empire is said to be worth around $500 million, according to the Wall Street Journal.