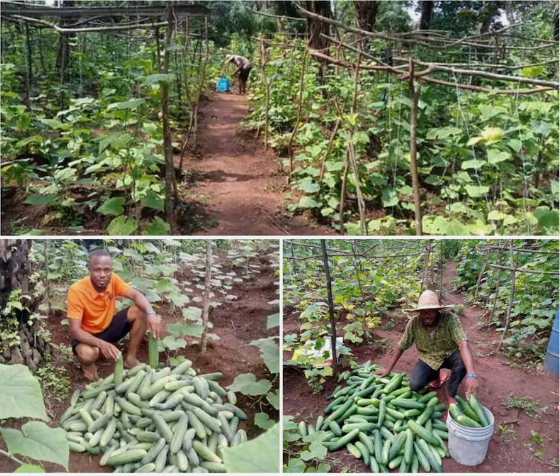 Sometimes, people succeed in other fields different from what they studied in school. For Eke William Chibuzor, a Nigerian graduate, farming is the real deal. Eke is a double degree holder: graduated from Federal Polytechnic Nekede where he studied business administration and management at both OND and HND levels and also read business management at Imo State University in 2016.

He recounted how he was discouraged by friends and some family members when he initially nursed the idea of venturing into farming as a graduate, but today they are marvelled by his eventual success in it. Narrating how it all started, Eke mentioned that he was sceptical at first when a friend advised him to consider going into cucumber farming.

Read also: Strange But True: Meet the Igbo Man Who Became A Billionaire by Transporting Dead Bodies During Funeral

He mentioned that a friend of his encouraged him to venture into farming that it would be profitable. He confessed he was sceptical at first that the business wouldn’t do well in Imo State but today the story is different.

He stated that some of his family members and friends were not happy with him over his decision to go into cucumber farming, many were surprised, others wondered why a double degree holder would venture into farming. They never believed. But today they’re happy with him and his parents who are farmers kept me stronger.

How to Hire Your Perfect Team in 5 Steps