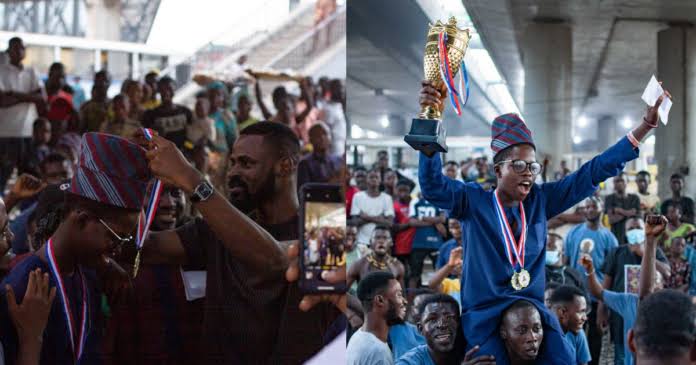 An 18-year-old Nigerian boy, Adeoye Fawaz, who works as a bus conductor to survive and has been living under the bridge all his life has finally had a life turnaround.

The turnaround was made possible by Tunde Onakoya, the CEO of Chess in Slum Africa, an organisation that has used the game of chess to give new meanings to many lives.

Fawaz will not be the only one whose life the NGO has changed. Many months ago, Tunde’s encounter with a boy with cerebral palsy seized media attention.

The boy who was mostly ridiculed by his peers because of his medical condition became the joy of his community. His skill at chess won him the attention of Lagos State Governor Babajide Sanwo-Olu.

Fawaz life changed In a LinkedIn post by Abubakar B, it was revealed that Fawaz emerged as a winner among his peers in a competition organised by the initiative. Photos shared online showed the boy wearing traditional attire, screaming with a trophy in his hand and medals on his neck. One of the snaps shared online showed the boy before his life changed. His chest bones were traceable due to a lack of proper nutrition.