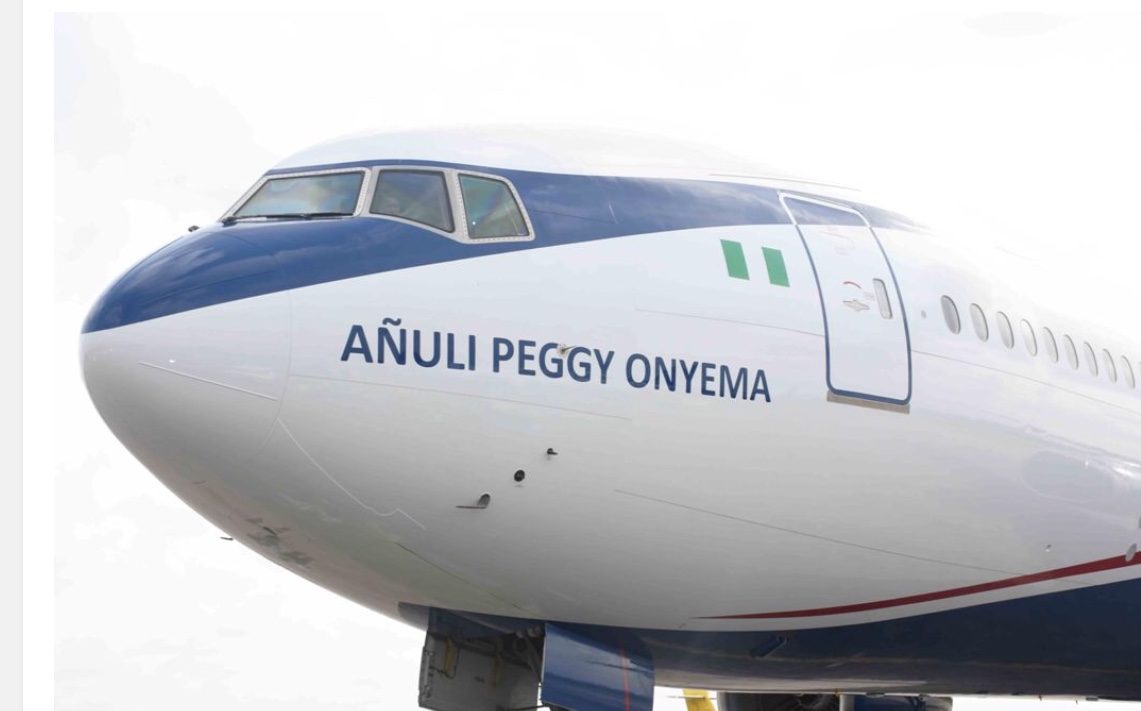 On Wednesday, it took delivery of its third Boeing 777 aircraft, an indication that it has received the boost for its plans to soon start long-haul flight operations to Sharjah, Dubai, London, Houston, Guangzhou-China, Mumbai and Johannesburg.

Flashback to February 23, 2018 when the airline took delivery of its first Boeing 777 aircraft, making history as the first Nigerian carrier to acquire and register the type of aircraft in the entire country.

The aircraft marked 5N-BVE and named “Ifechukwu” was soon followed with the delivery of a second Boeing 777 marked 5N-BUU and named “Ojochide” six months after on August 25, 2018.

Mymediaafrica.com gathered that the airline’s executive chairman usually tags his aircraft with names of his family members

On Wednesday, the airline’s latest bird of steel touched down at the Murtala Muhammed International Airport, Lagos at about 3:20pm.

It was honoured with a spectacular water salute staged by men of the Fire Service Department of the Federal Airports of Authority of Nigeria(FAAN), with a crowd of the airline management and staff as well as aviation authorities and workers from airlines cheering ecstatically.

Statement by the spokesperson of the airline, Chris Iwarah said “Air Peace said the latest aircraft in its fleet was a big boost for its plans to soon start long-haul flight operations to Sharjah, Dubai, London, Houston, Guangzhou-China, Mumbai and Johannesburg”.

Addressing reporters shortly after the aircraft marked 5N-BWI and named “Anuli Peggy Onyema” landed at the Murtala Muhammed International Airport in Lagos, Air Peace Chairman/Chief Executive Officer, Mr. Allen Onyema said the airline had proved beyond doubt that it was the face of the bright future of Nigeria in the global aviation industry.

He dismissed claims that Air Peace was merely acquiring and parking wide-body aircraft at the Murtala Muhammed International Airport in Lagos, saying the airline was strategically increasing the number of aircraft to be deployed for its long-haul operations to ensure quick and efficient recovery when any of the aircraft was out of service.

Onyema insisted that the airline had earned the respect of financial organisations and other critical stakeholders in the global aviation industry, assuring that the entry of the new aircraft would create more jobs for Nigerians and others. He added:

“I don’t think Air Peace is parking aircraft for fun. We brought in these aircraft to use them. We want to do this country very proud. We want to make every Nigerian proud of their own. Both the government and people of Nigeria have been complaining that there has never been any successful Nigerian airline. This is one airline out of Africa trying to do something different. All we need at this point in time is the support of everyone – both the government and people of Nigeria.

“I set up Air Peace in order to create jobs in a country with so much potential yet nothing to show for it. I and my wife just created this to give back to society. And that is very evident in the way we are running Air Peace. This particular aircraft will create at least another 1,500 jobs. And I want people to look at the potential, the number of families…Every Nigerian who is working takes care of about another 12 Nigerians. So, if I am going to employ 1,500 Nigerians because of the entry of this aircraft, it means this aircraft will be feeding 1,500 multiplied by 12 people daily. This airline is the biggest, not only in Nigeria, but the entire West Africa. This airline is respected worldwide.

“In Air Peace you have over 3,000 direct workers. We’ve created about 9,000 ancillary jobs in just four years of our operations. All we need is the continued support of the press, the government and the people of Nigeria. A lot of people are saying Nigerian airlines are poor, they are indebted, they don’t have integrity. Air Peace has integrity. All the banks in Nigeria want to work with Air Peace because of our integrity. All the banks outside Nigeria are looking towards Air Peace. They see Air Peace as an emerging force out of Africa and everybody wants to support it”, he concluded

In his words he assured, would offer Nigerians and other air travellers a dependable and comfortable alternative on the Sharjah, Dubai, London, Houston, Guangzhou-China, Mumbai and Johannesburg routes.

According to the Air Peace representative, Onyema says the airline would continue to sustain its high safety standards, deepen air connectivity and create massive direct and indirect job opportunities in all its areas of operation.