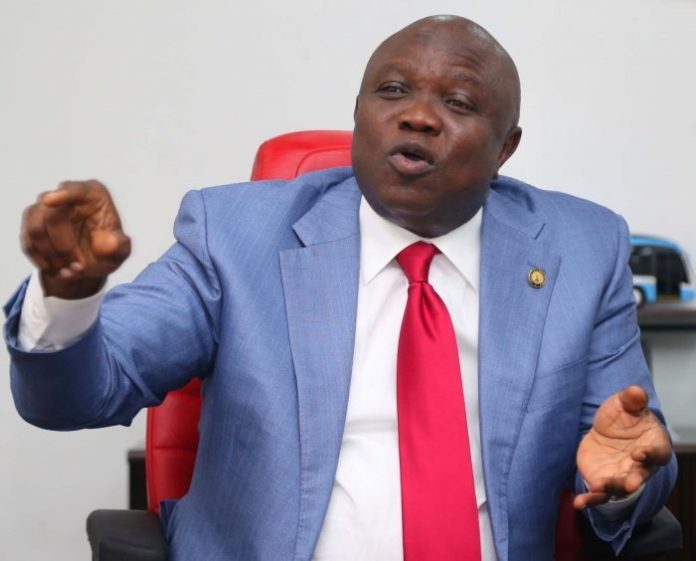 Less than a month to his exit from the seat of governance, Lagos State Governor, Mr. Akinwunmi Ambode has said he is leaving Lagos better than he met it, as his administration has grown the economy of the state.

Ambode said the economy of Lagos has improved despite recession and that his administration has put parameters in place to make Lagos the third largest economy in Africa.

According to him, he meticulously followed the vision embedded in the Lagos State Development Plan, which elapsed 2025, adding that “I am drawing from what has been put there which is also my own dream to make Lagos that financial hub, to make Lagos a safe, secure city, to make it a mega city and also to compare comparatively with all developmental cities.

parameters that can actually grow the GDP of Lagos are in place and only need to be accelerated. We have done it to a particular stage, we have stabilized it from where we have found it and irrespective of the recession and irrespective of the slow pace of the economy, there has been significant growth in the Lagos economy which is visible.”

The governor, in an interview published by Business Day, added: “But what is the most important part of it also, we have been able to create a night economy which was one of my missions. So, one thing that we should be seeing ahead is an economy that compares comparatively with New York; an economy that

actually takes that vantage position right now because we know that the next economic development in the whole global system is in Africa and Lagos is just positioned as a trigger because of its natural advantages not necessarily because of our skill-sets; it’s just positioned there and so the competencies and

the skill-sets that will drawn in terms of governance and leadership is what should see Lagos as the third largest economy and then compare favourably with cities like Mumbai and everywhere that you go. I mean, you want to see Lagos like a Tokyo but you need a lot of investment in technology.”

Ambode also spoke on how his administration was able to grow the Internally Generated Revenue, IGR, of Lagos, saying that one of the strategic instruments in that development plan was to create a financial model for Lagos State,

explaining that it was not enough for “us to say we are having strategic pillars of development without knowing how to fund it and so in the development plan, a growth plan for revenue generation had actually been embedded in it.

“Fortunately for Lagos, you have statistics that favour revenue growth. Lagos is the commercial capital of Nigeria; the business community in terms of population or location is here and this is like 70 per cent of what is happening in Nigeria; we have the market and again Lagos is the most sophisticated. Those indicators were just enough for anybody to carry on from where it stopped and then able to continue.

“Remember also when we came in, the revenue that was generated on a monthly basis was about N12 billion and then it moved to almost like N20 billion. Today, we are having an average of N30 billion to N35 billion a month but it is not as if the expansion is based on increase in rate or taxes, what has

been done is just improvement in collection machinery and then expanding the tax net and the ability to be able to put people together and run an efficient civil service system that was able to tap into those things; and then more importantly, investing in technology to be able to carry out some of these collections.

“Yes, revenue has improved tremendously but obviously it is based on focus, and it is based on the ability to match those needs in terms of development and economic growth with how to fund it. Lagos is also favoured by the fact that because of the dynamics that we have, we are likely to be more attractive to the capital market and also more attractive to commercial banks and the ability

to pay back would always give you more resources to be able to get funding for most of these projects that we have done. Remember also that 67 per cent of the total revenue that accrues to Lagos State comes through the IGR so the best model is to continue to expand the IGR base in order for you to be able to cover your fixed cost and also do every other things that we have been able to do.”

On why Lagos has always been blessed with good leadership with good vision, the governor said that the state had continually used the same set of objectives and goals in a plan that was consummated into a development plan and that the same set of policy document from one government to the other had remained, asides fact that the same party was still ruling Lagos.

and same for Sanwo-Olu that is coming in, he has worked in the system. So, that could be a positive thing to be able to draw so much of synergy from the policy document and if you don’t deviate too much, you are likely to deliver on the set objectives in the policy document.

“So, we don’t expect anything away from that and Lagos is lucky, the next four years should actually see something better than what I have done because there has been a trajectory that if you are using the same set of policy document, whoever is coming in next should actually build on what you have done and I don’t expect anything less from the incoming government,” he said.

Meet Sanna Marin, One of The World’s Youngest Prime Ministers

Jack Ma is making history again with the Ant IPO, and...

Incredible Success Story of a 26 Years old Billionaire who started...