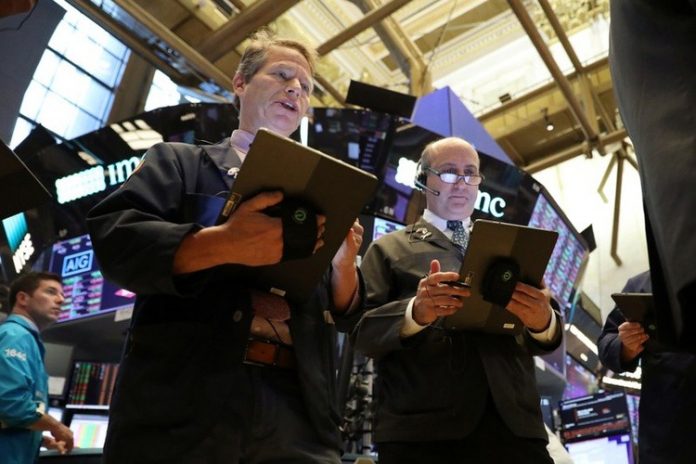 The S&P 500 index notched a fresh record high on Wednesday, as gains in Apple Inc’s shares after forecast-beating results powered a rally in technology stocks ahead of the Federal Reserve’s latest policy announcement.

Shares of the iPhone maker jumped 5.3% after the company said sales in China were steadying and touted how rising demand for its services and accessories helped offset a record drop in iPhone revenue.

The company also announced plans for a new $75 billion share buyback and bumped up its cash dividend by 5%, putting it on course to reclaim $1 trillion in market capitalization.

The technology sector gained about 0.7%, the most among the 11 major S&P sectors.

“Many were expecting an earnings recession and we haven’t had that and we’re still positive on growth,” said Randy Frederick, vice president of trading and derivatives for Charles Schwab in Austin, Texas.

“It’s been a good earnings season overall, Apple could potentially be positive for the tech sector overall.”

Analysts are now more optimistic on first-quarter earnings growth and expect a 0.5% rise compared with a 2% fall estimated at the beginning of April, according to Refinitiv data.

Of the 305 S&P 500 companies that have reported so far, 76% have topped Wall Street estimates.

Besides a largely upbeat earnings season, recent gains in shares have also been powered by positive economic data, a dovish Federal Reserve and signs of progress in U.S.-China trade talks.

Investors will also look for direction on monetary policy when the Fed concludes its two-day meeting later in the day.

The financials sector, which tend to benefit from a rising rate environment, rose 0.24%, with S&P banks up 0.46%.

Hilton Worldwide Holdings gained 6.4%, the most among S&P 500 companies, after the hotel operator reported quarterly revenue above analysts expectations.

The healthcare sector fell 0.6%, as shares of Amgen Inc fell 4.2% after the world’s largest biotech reported first-quarter revenue that was unchanged from a year ago.

The private survey comes ahead of the much anticipated government jobs report on Friday, which is expected to show fewer job additions last month compared to March.