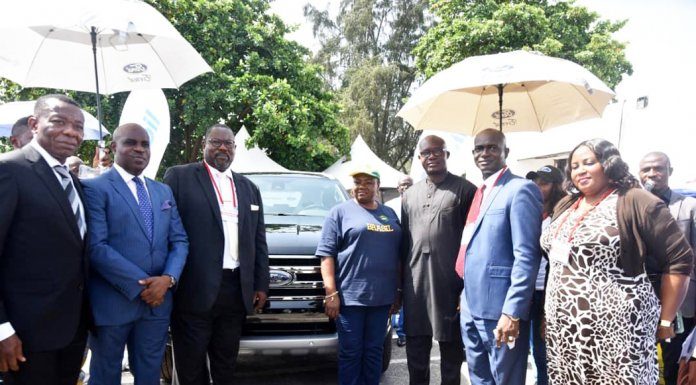 The all new Ford Everest XLT Range and Everest Limited has launched into the Nigerian market, boosting the vehicles’ positioning in the country.

The launch, by Coscharis Motors, the sole representative of Ford Motor Company in Nigeria, took place on Wednesday at the Lagos International Motor Show, which winds up today.

The new Ford Everest is the most sophisticated Everest seven-seater sport utility vehicle (SUV) on the market. It is more appealing than ever with a range of styling, suspension and feature upgrades, said the General Manager, Marketing and Communications, Coscharis Motors, Abiona Babarinde.

He said the new Everest would “provide Ford an important position in the SUV segment, it is a segment which continues to grow in Africa, as well as around the world. Consumers are opting for versatile, family-oriented vehicles that suit their active lifestyles.

According to him, “We are excited the new Everest will be joining our local line-up. With the New Everest, we have raised the game even further by introducing subtle yet effective styling updates with the eye-catching exterior, providing a more refined and luxurious cabin environment, adding several new trend-setting technologies to the already feature-packed range, and building on the outgoing model’s superb comfort and ride refinement with a revised suspension set-up.

“More so, the Everest comes in diesel engines, which is what some of our oil services customers have been yearning for, as it is more ideal for access into highly inflammable locations than its petrol counterpart.”

The New Everest communicates rugged off-road capability with a sense of refined artistry that takes Ford’s seven-seater SUV to a new level within the segment. The refreshed grille introduces a new level of depth to the design through the layering of three distinctive grille bars that exude exclusivity and luxury whilst presenting a sense of strength and robustness.

The lower bumper has been redesigned to accentuate width, incorporating a connected horizontal beam that has been added to the fascia insert, which gives the Everest even greater on-road presence.

A classy new 20-inch wheel has been introduced on the range-topping Everest Limited, featuring a modern split spoke design that gives the vehicle a more upmarket and dynamic appearance.

Ford has also upped the ante in terms of overall quality and refinement, employing a more purposeful execution of colours and materials. Stronger contrasting elements are employed with the addition of the secondary grille texture against the chrome bright work.

The accents move from a single-layer satin metallic to a two-layer glossy metallic paint, giving a more liquid-like feel for customers expecting outstanding quality. The wheel accent paints are now darker to further accentuate the machine-cut surface of the alloys, adding more drama and a more premium look to the overall appearance.

A new exterior body colour has been added to the line-up: Diffused Silver is designed as a modern take on the typical luxury beige. It communicates toughness with its added depth and also sophistication with its smooth champagne highlights.

The New Everest provides premium levels of quality, outstanding interior space and maximum versatility – now with a selection of new, richer materials and design details that emphasise luxury and style throughout.

The introduction of the Ebony environment colour changes the entire ambience of the interior cabin. The added depth allows the details and bright work to stand out and further aligns the interior to the customer’s expectation for a premium SUV, complemented by a greater selection of soft-touch materials.

Adding further exclusivity to the cabin is the use of contrast stitching on the Everest Limited, along with shadow chrome finishes, perforated leather and high-quality paints that add further lustre to the upgraded interior.

The current 2.2-litre Duratorq TDCi engine, with 118kW and 385Nm, is available in the Everest XLT derivatives, with a choice of six-speed manual or automatic derivatives. An electronic differential lock is standard across the Everest range to enhance off-road capability.

Customers also have the option of the powerful 3.2-litre five-cylinder TDCi engine on the XLT model with 147kW and 470Nm on tap, matched to a six-speed automatic transmission and four-wheel drive.

All Everest 4×4 models are equipped with Ford’s seamless and intuitive Terrain Management System that facilitates easy switching between Normal, Rock Crawl, Mud and Sand modes to suit the driving conditions.

As with the New Ford Ranger, the New Everest has benefited from numerous suspension improvements that further enhance ride quality and refinement. Most notably, the front-mounted stabiliser bar has been moved to the rear of the front axle, which allows for greater packaging and design freedom, along with an increase in diameter and stiffness to give the Everest improved roll control and handling performance.

The revised layout has also enabled a reduction in front spring rates, thus achieving an even more comfortable and pliant ride. Additionally, the jounce bumper, which softens the impact when the suspension is fully compressed over severe bumps, has been relocated from the lower control arm to the damper rod at the top of the suspension, thereby reducing the load on the suspension bushes. This gives an improved ride and reduced noise levels.

Overall suspension compliance has been improved, with three damper tunes being adopted for the New Everest range in place of the single set-up used previously. This ensures that the ride characteristics are better tailored to the engine and drivetrain configurations, resulting in a plusher ride over rough surfaces without impacting the Everest’s maximum towing capacity of 3 000kg with a braked trailer.

The extensive suspension refinements have also enabled a reduction in tyre pressures from 240 to 210 kPa, further enhancing overall comfort and isolating the occupants from road imperfections. At the same time, steering precision and control has also been improved.