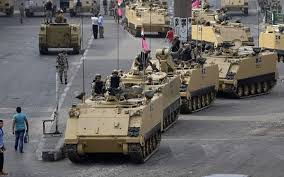 Egypt has been the military powerhouse of Africa for a long time and continues to be so. It was one of America’s main military aid recipients for countless years.
Many speculated that the military would weaken due to the political instability, but it seems to have gotten even more powerful. Its huge 500,000 active frontline personnel are ahead of all its African counterparts.
Egypt is also the only country in Africa to have not one but two aircraft carriers.
The following are some of its equipment: 309 fighter aircraft, 409 fighter aircraft, 10 attack helicopters, 4,946 combat tanks, 1,216 rocket projectors, 15,695 armored fighting vehicles, 1,139 self-propelled artillery, 2,189 towed artillery, 2 aircraft carriers, 9 naval frigates, 6 submarines, 53 naval patrol craft, etc.