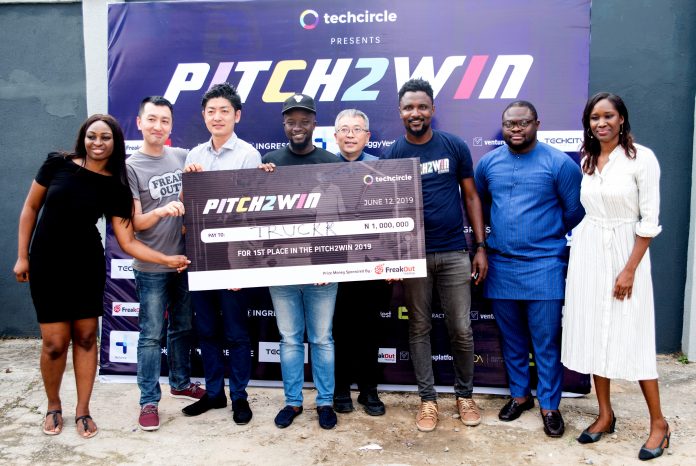 A pitch competition launched by TechCircle called Pitch2Win, which aims to find disruptive startups and connect them with investment opportunities held this year’s edition in partnership with Japan’s FreakOut Holdings, on the 12th of June, 2019 at the Impact Hub Lagos, Ikoyi.

It featured 10 startups selected out of 200 entries across various sectors, and the winner had to be solving a local-specific problem.

In the week ending on the 5th of May 2019, the movie Avengers Endgame topped the box office globally– from South Africa to Vietnam, Russia, China- elsewhere but Japan.  Detective Conan: The Fist of the Blue Sapphire, an animated film by Japanese Animation Studio TMS Entertainment edged Avengers Endgame to second place. Yuzuru Honda,  Global CEO and founder of the Adtech Company, FreakOut Holdings said this pointed to Japan’s uniqueness as a country building solutions specifically for local problems, an incentive that has fuelled his desire to connect with and fund local companies solving local problems in Africa.

The pitch competition was judged by Honda, Dr Ola Brown of FlyingDoctors and Greentree Capital Investments, Dr Femi Kuti of Reliance HMO whose startup won the last edition of the Pitch2Win, Babara Iyayi of Lateral Capital, and Hiro Mashita of M&S partners. The participating companies were evaluated based on the size of the problem they are looking to solve, their product and its traction, team composition, and pitch presentation.

Driversng’s pitch opened the competition. Their fintech product seeks to improve financial inclusion especially for market women and drivers at bus parks. The service allows them to exchange cash for scratch cards that will then be converted to electronic money using phones.

The second pitch was from Ghana’s Truckr, an online marketplace for listing and booking of third-party trucks. Caryl Joshua Akonor, Truckr’s founder, opened the pitch with a jocular line about how almost every item in the room must have been on a truck at one point or the other, and the difficulties around finding trucks to move items. The startup went on to win the pitch competition. Truckr started operations in May 2019, after a four-month pilot that started in January. Caryl said they’ve done $12,000 in revenue since then and are looking to increase revenue by 15% month-on-month with the funding.

The runner-up Asusu, builds digital infrastructure for informal microfinance organisations. They do this by digitising the financial activities of low income and daily earners through cooperatives, trade groups, agent networks, and partnerships. While Prodigy, a school management software that helps schools process reports faster, among other things came third. They are looking to tap into the market of over 1.5 million schools across Africa.

Other startups that featured include:

Curacel, a startup that uses an “intelligent rules engine to tackle fraud, waste and abuse in healthcare insurance”, came third. Founder, Henry Mascot citing over 25,000 claims processed, said the startup needed the fund to employ hands that will annotate and label data for the engine to be fully Artificial Intelligence powered.

Gricd Frij, an affordable mobile cold chain box to transport temperature sensitive items such as blood, vaccines and other healthcare products. Plumter’s Co-founder Simi Adejumo presented a smart secretary, that helps users schedule, coordinate and keep records of your meetings. Nancy Ewurum, Aidahbot’s founder and CEO pitched a solution that helps their customers automate customer interaction. Cashbudy, helps Nigerians convert airtime to cash. Lendsqr, with a minimum viable product and set to enter the market, provides software as a service to lending businesses who do not want to go through the hassle of building their own custom software.

On presentation of the prize to the winning startup, Truckr, who also won the popularity contest based on retweets on Twitter, the event closed with food, drinks and a networking session that saw investors engage the pitching startups.

Honda says he is excited to have been a part of the competition and looks forward to investing in more startups on the continent, where he sees a lot of potential.