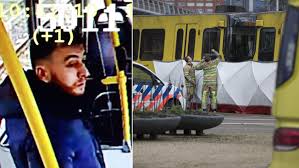 Dutch authorities have named a 37-year-old Turkey-born man as linked to the tram shooting in the central Dutch town of Utrecht.

Three people have been confirmed dead in the shootings.

Police showed the picture of a bearded man sitting on public transport and dressed in a dark blue top with a hood tucked in his neck. Police identified him as Gokmen Tanis.

It was the first image distributed of someone linked to the shooting. Police warned citizens not to approach the man but call authorities insteadEarlier, police surrounded a building where the suspected gunman “with a possible terror motive” was said to be holed up.

The gunman, who may not have been acting alone, opened fire on a tram in the Dutch city of Utrecht, killing at least one person and injuring many others.

Police raised the terror alert in Utrecht to its maximum level and put local schools into lockdown as gunshots were reported in several areas of the city, a university town about 45 minutes’ drive south of the capital Amsterdam.
Pieter-Jaap Aalbersberg, the head of the Dutch counter-terrorism agency, said in a statement that the “threat level has gone to 5, exclusively for the Utrecht province,” referring to the highest level, adding that the shooting “appears to be a terrorist attack”.

‘The culprit is still on the run. A terror motive cannot be excluded,’ he said in a Twitter message. He called on citizens to closely follow the indications of the local police.

Utrecht police said multiple people had been injured and at least one killed as they opened an investigation into what they said was a possible terror motive behind the attack.

Three hours after the initial attack on the tram at the 24 October Square, Utrecht police took to social media urging people across the city to stay indoors.
“New incidents are not excluded. The police are currently still looking for the offender,’’ the police tweeted.

They urged “everyone to stay (inside) in Utrecht.’’

There was carnage on a morning tram when at least one gunman opened fire at 10.45am local time (8.45pm Monday night AEDST).

Police said “multiple people’’ were injured when the gunman apparently fired indiscriminately into the commuters.
One person was later confirmed dead.

“We also take into account a possible terrorist motive.’’

The incident happened at the 24 October Square tram stop just outside the centre of the city, in a residential area of the popular university town, which has a population of around 350,000 people.