Howard Schultz (born July 19, 1953) is an American billionaire businessman who served as the chairman and chief executive officer (CEO) of the Starbucks Coffee Company from 1986 to 2000, and then again from 2008 to 2017. Schultz also owned the Seattle Supersonics basketball team from 2001 to 2006.

He is one of the few billionaires who started out with nothing but his hard work and tenacity has definitely made a name for him.

He was born into the Schultz family in Brooklyn, New York. His parents were both high-school dropouts. Howard grew up in a public housing project. It was here he claimed to have experienced one of the biggest defining moments in his life.

He claimed that the level of pain and despair he went through growing up left scars on him even till the present day.

Howard paid for his college through working as a bartender and even sold blood. He also worked wide range of jobs prior his school and also after school.

In an interview with the Mirror, Howard Schultz confessed that growing up was difficult for him as he saw people living on the bright side of life but his family couldn’t afford to do so. Of course it served as a source of motivation for him and for some reasons he wanted to climb over that barrier and achieve what was deemed impossible. He said he could presently be living in luxury but he has definitely had a sheer taste of poverty. 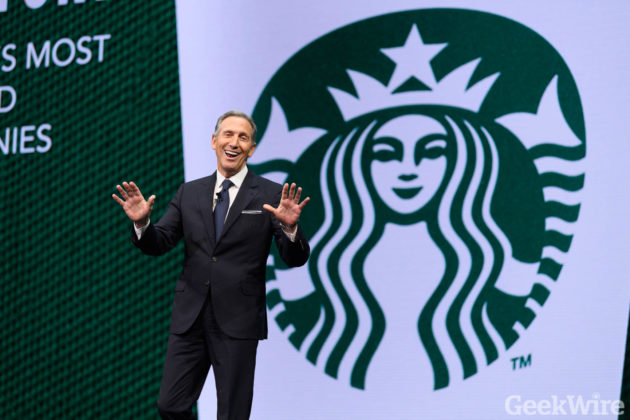 After graduating from college, Howard worked at a ski lodge in Michigan, in sales at Xerox, and at a housewares business called Hammarplast.

Howard Schultz began his coffee career as a worker at the coffeehouse Starbucks in 1982. He later left and opened Il Giornale, a specialty coffee shop, that merged with Starbucks which at the time had only 60 shops during the late-1980s.

Schultz became the company’s CEO in 1987 and grew the coffee chain to over 16,000 outlets worldwide all through his tenure as the CEO, and generated an estimated $100 Billion worth of revenue. He stepped down from his role as the coffee giant’s CEO, and also resigned as executive chairman in 2018.

The billionaire CEO’s current net worth stands at $3.7 billion according to Forbes. He is happily married to Sheri Kersch with whom he has two children.