Ali Bin Nasser, a former Tunisian referee, who officiated England’s controversial loss to Argentina at the 1986 FIFA World Cup quarter-final, says he is “honoured” to have helped Diego Maradona score the “goal of the century”.

The diminutive football legend died from cardiac arrest on Wednesday at the age of 60.

In that encounter, the Argentine star scored two goals — the first with an arm in what is now known as the infamous “Hand of God” and the second wherein he dribbled past six England players, which was also dubbed “goal of the century”.

In an interview with BBC, Bin Nasser said if he had whistled for foul — while the then-Napoli star was dribbling past the six oppositions — the world would not have witnessed Maradona at his very best.

“He took off from midfield, and I was shadowing him closely. When you’re refereeing someone like Maradona, you can’t take your eyes off them,” said Bin Nasser.

“They tried to take him down on three occasions, but his desire for victory kept pushing him forward. Every time I would shout ‘advantage’ until he reached the box.

“I was watching from outside the box, wondering how this player shook off three defenders, and sprinted for nearly 50 metres. I thought ‘the defenders will try to take him down now’. I was expecting that to happen and was ready to whistle for a penalty.

“To my surprise, he dribbled past another defender and the goalkeeper [Peter Shilton] to score what would become ‘the goal of the century’.

“I’m proud and honoured as a person and as a referee for having played a role in that historical achievement.

“Had I whistled [for] a foul in any of the first three contacts, we wouldn’t have witnessed something that magnificent. That advantage I gave is one my proudest achievements.” 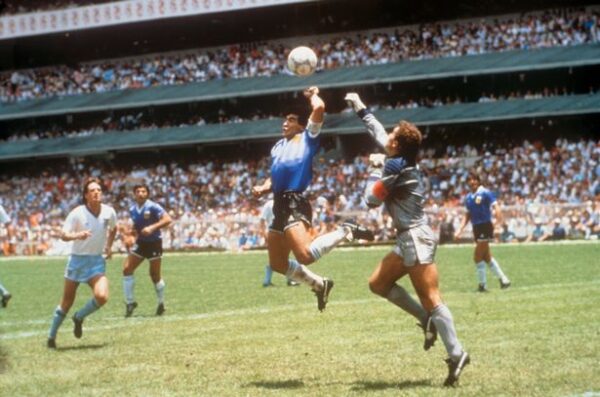 Even at 5ft 5in, Maradona managed to rise above Peter Shilton for his ‘Hand of God’ goal

The 76-year-old retired referee said the clash was the highlight of his career despite the “Hand of God” controversial goal.

“I remember it vividly,” he continued.

“The English defender [Steve Hodge] had the ball, sent it back and Maradona was in the air with Peter Shilton, and they were both facing away from me.

“They were facing my assistant referee, the Bulgarian Bogdan Dochev.

“I was hesitant at first, I glanced over to Dochev, who was headed back to the centre of the pitch, confirming the goal. He didn’t signal for handball.

“The instructions Fifa gave us before the game were clear – if a colleague was in a better position than mine, I should respect his view.”