Ritesh Agarwal is an Indian entrepreneur and the founder and CEO of Oyo Rooms. He became the world’s second-youngest billionaire in 2020.

Ritesh Agarwal was born in Bissam Cuttack, in Odisha state, India, and brought up in Titilagarh. At the age of 13, he started selling SIM cards. He graduated from St. Johns Senior Secondary School and moved to Delhi in 2011 for college. He dropped out of college.

He struggled with life for 18years, with no college, and no career. He described that moment as the toughest moment he was ever going to endure in his life. He was kicked out of his apartment at some point since he couldn’t pay his rent. He went into the street with just $0.50 (50 cents).

His turning point came when he embraced his passion for solving real problems instead of just chasing after money. So he noticed that a nearby hotel was mostly empty due to lack of customers. At that point, he decided to take the biggest risk of his life when he approached the owner of the hotel and assured him that he will change the fortune of the hotel. 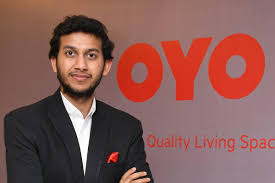 So he said since he could change and make one hotel better then he can do the same to hundreds more. At the age of 20, he got funding for investors, and a year later he employed 50 people. And at the age of 22, he owned 500 hotels.  At 24 years he raised $1 billion and he currently owns 43,000 hotels and has built the second-largest hotel chain in the world.

Ritesh Agarwal was discouraged by many as some people even told him to go back to the university because his plans were not good enough and it won’t work.

Truly inspiring how a poor kid from india who started with just 50cents in his bank account turned his fortune within 6years to become the second youngest self-made billionaire in the world. His net worth in 2020 was estimated to be approximately $1.1 billion (INR 7253 crore) according to Hurun Rich List 2020.