Innocent Chukwuma is a Nigerian business magnate and astute entrepreneur. He is the Chairman and founder of Innoson Group of Companies, and also the man behind Africa’s first indigenous motor brand, Innoson Vehicle Manufacturing, who started off by started from spare parts selling.
He currently sits on the board of IVM Innoson Group of Companies and a member of Manufacturer Association of Nigeria. He also serves as a Chancellor at Imo State University, Owerri.

Innocent Chukwuma was born on 1st October 1961 into a humble family in Uru-Umdim, Nnewi, Anambra State. His father, Chukwuma Mojekwu was a junior civil servant while his mother, Martina Chukwuma was a stay-at-home mum. He is last of the six children, four boys and two girls.
He lost his dad when he was little and was raised along with his siblings by their mom. His elder brothers played the role of a father to him and which made it less traumatizing for him.
He had his primary and secondary education in his hometown Nnewi where he graduated in 1978. He couldn’t pursue his passion to study engineering in the university as he was denied entry because he failed to reach the cut off mark. 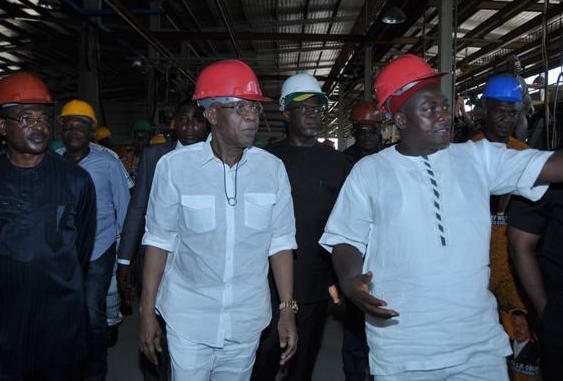 He made good out of the disappointment in his failure to gain admission by assisting his elder brother in his medicine store. He soon discovered he has a flair for trading so he went a one-year apprenticeship with Chief Romanus Eze Onwuka who was the biggest motorcycle spare parts dealer at the time.
It took him less than a year to get acquainted with the business something that takes others up to five years to master. After his first year, he started a spare parts business with N3,000 his brother gave to him and business already registered. He soon turned the business into a profiting one even at the point where the business made over ten times of the profit his brother medicine store made after just a year of starting. This led to his brother closing down his medicine store to join him in the business which they both grew together.

The start of Innoson Nigeria Limited

In 1981, He launched Innoson Nigeria Limited with his savings and the money his brother Gabriel gave to him. Innocent started trading in Honda motorcycle spare parts and soon started importing motorcycles.
He soon saw a notable problem that needed fixing and that was what led him to start importing motorcycle parts and assembling it here in Nigeria, instead of importing them in whole. His new strategy gave room for more motorcycles and made it cheaper, where others sold for N150,000 he sold for as low as N60,000 to 80,000.
Innocent Chukwuma was the first person that introduced Jingcheng brand of the motorcycle into Nigeria.
Being an astute and innovative entrepreneur he had to adapt new markets and new ways to sell to his customers. This led to the expansion of Innoson Nigeria Limited and he started a plastic factory realizing motorcycles were mostly covered with plastics, this gave him more room to import more spare parts at a time.
His plastic manufacturing firm is now one of the largest manufacturers of plastic products in Nigeria, and also one of the largest manufacturers of crash helmets in West Africa. His old competitors now buying plastics from him.
Soon he ventured into building vehicles when the motorcycle markets became crowded. He established the first automobile manufacturing company in Nigeria under the aegis of the Innoson Vehicle Manufacturing Company.

See also: Meet Nuel Ojei, The Nigerian Billionaire who started with nothing and attained a frontline position in all sectors of the economy

Subsidiaries of Innoson Group of Companies

• Innoson Nigeria Limited
The company was incorporated in July 1987. They now specialize in the manufacturing of motorcycles, tricycles, spare parts and accessories. It is located in Nnewi, Anambra State.

• Innoson Vehicle Manufacturing (IVM)
Innoson Vehicle Manufacturing was incorporated in 2007 and commissioned on the 15th of October, 2010 by President Goodluck Ebele Johnathan. It’s into the production of a high capacity city bus, safe and cost-effective mini & midi buses, pick-up trucks, and garbage collecting vehicles. The company also provides good services for repairs and parts supply. And is located in Nnewi

• Innoson General Tyres and Tubes Co. Ltd
They produce about 8,000 pieces of motorcycle tyres and 13,000 tubes daily. The company’s plant is located in Enugu State, South-East region of Nigeria.

Innocent Chukwuma has won for himself numerous awards as listed below;

• Justice of Peace by Enugu State Government 2006.
• Industrialist of the Year by Nigerian Union of Journalist, Enugu State 2006.
• Meritorious Awards by Nigerian Society of Engineers (NSE) 2008.
• Officer of the Order of the Niger (OON) 2008.
• Award of Excellence, Manufacturers Association of Nigerian (MAN) 2008.
• Honorary Doctorate Degree in Business Administration by Enugu State University of Science and Technology 2011.
• Business Person of the Year by the Sun Publishing Limited 2011.
• Best Customer by Bank of Industry, 2011.
• Entrepreneur of the Year by Wesley University of Science and Technology, Akure 2012.
• Most Innovative Entrepreneur by Vanguard Newspaper 2013.
• Auto Personality of the Year by Guild Motoring Correspondence 2013.
• Entrepreneurial Ambassador by Nigeria Arise 2014.
• Honorary Doctorate Degree in Business Administration by University of Nigeria 2014.
• Accomplished Contemporary Entrepreneurs’ Award by Federal Government 2014.
• Professor Barth Nnaji Prize for Technology at Igbo Awards 2017.
To further arrest the challenge of manpower, he established the Innoson Kiara Academy, a Technical and Vocational institution established in partnership with an international consulting firm.