Billionaire tech tycoon Jack Ma is raising more than $34 billion in yet another record-breaking IPO, further cementing his place in history as one of the world’s great tech entrepreneurs.

Financial tech company Ant Group’s share sale in Hong Kong and Shanghai — the biggest in history — will catapult Ma to within striking distance of the globe’s richest elites. Bloomberg estimates that the 56-year-old’s fortune will soon hit $71.1 billion, positioning him as the 11th wealthiest person in the world.
Through e-commerce giant Alibaba (BABA) and now Ant Group, Ma has had a transformational effect on China’s internet industry and on hundreds of millions of Chinese consumers. It’s hard to go anywhere in China and not see the impact of Alibaba and Ant, said Duncan Clark, author of “Alibaba: The House That Jack Ma Built” and chairman of investment advisory firm BDA China.
If you live in China, “you’re going to be touching the companies that Jack founded pretty much every day, and almost every hour in some cases,” Clark said.

It’s more than just using an app or an online shopping website that Ma helped build. A massive number of Chinese “associate these products with the last 10 years of rising prosperity,” Clark said. “There’s an emotional element to it.” 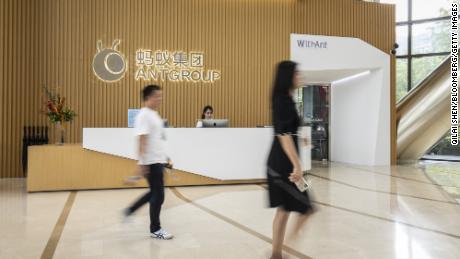 Ant Group raises $34 billion in the world’s largest IPO
Ma createdAlipay — the payments business that forms the backbone ofAnt — as a side project to plug a hole in China’s nascent online shopping industry. Before Alipay was created, inefficient state-run banks with reputations for poor customer service were the only options available for most businesses and consumers. A convenience store owner who needed a few hundred dollars to get through the month would likely not have bothered going to the bank to get a loan because it would have been too troublesome, said Zennon Kapron, founder of financial technology consulting and research firm Kapronasia. Ant changed all that.
“[Ma’s] vision from the very beginning was to enable people to essentially do better and give them the tools to do that,” said Kapron.
Through Ant, people can apply for and get decisions on small loans quickly. They can also pay for things with the tap of a button and they can invest in big money market funds with as little as 1 yuan (15 cents).

Ma’s accomplishments are well known in China.
Edith Yeung, China internet expert and general partner with Race Capital, rattled off a list of hurdles that should have stood in the way of his success: He is short, grew up during China’s turbulent Cultural Revolution, had no family connections, didn’t have an Ivy League degree and founded Alibaba in 1999, two years before the dotcom bubble burst.
Ma represents “the ultimate Chinese dream,” Yeung said. That “somebody like him, with all the wrong formula[for success], can get to this point, it’s just amazing and astonishing,” she said.
“Chinese people look up to him because he looks just like us and he [achieved] mega-success, Silicon Valley-style,” she added.
Ma is already the wealthiest man in China, according tothe Bloomberg Billionaires Index and the most recent Hurun China Rich List published last week. Ant’s IPO will make him even richer.
Ma — who has “ultimate control” over Ant — will hold an 8.8% stake in the company worth more than $27 billion post-IPO, according to regulatory filings.
His fortune will soon exceed that of Oracle’s (ORCL) Larry Ellison, L’Oreal (LRLCF) heiress Francoise Bettencourt Meyers and individual members of the Waltons, whose family own Walmart (WMT), according to Bloomberg.
Ant’s market debut will also mark the second time Ma has spearheaded a world record-shattering IPO.

He was on the floor of the New York Stock Exchange when Alibaba raised an eye-popping $25 billion in 2014. It was the largest ever IPO at the time and was surpassed just last year by Saudi Aramco’s $29.4 billion floats. Ant announced on Monday that it is raising more than $34 billion through dual listings in Hong Kong and Shanghai. The shares are expected to start trading in Hong Kong on November 5.
Speaking at a business conference in Shanghai last week, Ma touted the fact that the pricing for Ant’s IPO was “determined outside of New York City,” underscoring China’s growing clout in finance and tech.
“We didn’t dare to think about it five years ago, or even three years ago,” Ma said, calling it “a miracle” that such a huge IPO can now take place in Hong Kong and Shanghai.
Alibaba shunned Hong Kong for its market debut in 2014 because the exchange refused to allow it to list with dual-class shares, a corporate structure that gives management more power. Hong Kong changed its rules in 2018, enablingAlibaba to list secondary shares in the city last year. When Shanghai’s new tech board launched last July, it fell in line with the New York Stock Exchange, Nasdaq, and Hong Kong by allowing listings of companies with dual-class shares or weighted voting rights.
Ant’s IPO also comes as a growing number of Chinese companies have been seeking refuge on national exchanges as tensions between Washington and Beijing ramp up.
“It’s kind of ironic validation to do [part of the Ant] listing in Hong Kong. It’s perfect timing to stick it in the eye of the United States as well,” said Clark. 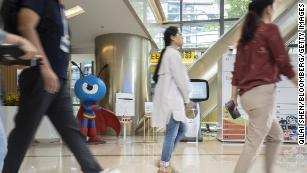 Ant IPO is a measure of China’s growing strength
Beyond regulatory evolutions, Ma has also overseen dramatic changes in China’s internet industry. The tech tycoon learned about the internet during a trip to the United States in 1995. Invigorated by the technology, Ma returned to China, where the internet was still virtually unknown.
“The day we got connected to the web, I invited friends and TV people over to my house,” he told The New York Times in an interview in 2005. “We waited for three and a half hours and got half a page. We drank, watched TV and played cards, waiting. But I was so proud. I proved the internet existed.”
Today, Alibaba’s platform regularly hosts frenetic live-stream shopping events where millions of consumers watching on smartphones can buy everything from make-up to mangoes. Ma himself appeared alongside a celebrity influencer to take part in a live-stream challenge to sell lipstick in 2018.

Measuring Ma’s impact against his contemporaries, “he ranks right up there … next to Steve Jobs, and Bill Gates and Jeff Bezos,” Kapron said.
Clark, the author, goes back further in time, likening Ma to American industrialist and business magnate Henry Ford.
“In terms of Henry Ford’s standardized production, you can think about that in terms of the logistics of the Alibaba empire, and retail, and now with Ant’s [impact on China’s] finance. Those are three big sectors right there that he’s linked in new ways and revolutionized,” he said.

Ma stepped down from his role as chairman of Alibaba last year and has over the years increasingly turned his focus to philanthropic efforts in China and Africa.
He has pledged to donate 611 million of his Ant shares to charitable donations.
Source: CNN