HomeBillionairesJeff Bezos sells more than $2.4B in Amazon stock
Billionaires 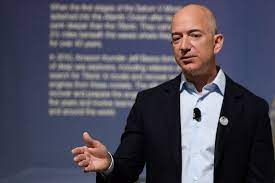 Bezos said in 2017 that he was selling $1 billion a year to fund his Blue Origin space venture, but he has been increasing the size and frequency of the stock sales recently. He sold more than $7 billion last year. This is his first stock sale of 2021.

Amazon’s stock price soared last year to record-highs amid the pandemic as the company’s e-commerce, cloud computing, and advertising arms have boomed. Shares have increased slightly thus far this year, trading Wednesday at around $3,270.

Significant stock sales by top corporate executives are often made based on a schedule set out in advance.

According to Bloomberg, Bezos is the world’s richest person, currently with a net worth of $191 billion.

See also: LeBron James’ investments that have him on course to become a billionaire

Bezos owned 14% of Amazon as of Feb. 16, according to the company’s annual proxy statement. He is stepping down as CEO later this year and will be replaced by Amazon Web Services chief Andy Jassy. Bezos will remain as executive chairman.

Under his divorce settlement with MacKenzie Scott in 2019, the Amazon founder received 75% of the couple’s Amazon shares and retained voting authority for the remaining shares.

Following the divorce, Scott last year gave away more than $5 billion of her vast wealth to a variety of organizations. Scott also signed The Giving Pledge, a commitment to give away the majority of her fortune to charity. She is ranked No. 21 on Bloomberg’s list with a net worth of $57.8 billion.

Bezos has increased his philanthropy in recent years, including a $10 billion climate change initiative and the $2 billion Day 1 Fund, which supports homeless services and early childhood education.