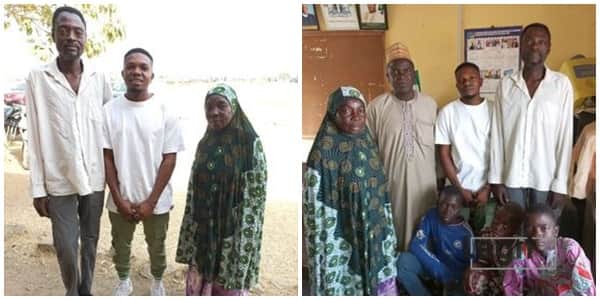 Collins just completed his one-year mandatory National Youth Service Corps (NYSC) in the north-central state but chose not to go without touching the lives of those who hosted him.

Incidentally, Collins was born and brought up in Maitumbi, Minna, Niger state, the same place he was posted for his NYSC. He graduated from the University of Nigeria, Nsukka (UNN).

In an exclusive comment sent to Legit.ng by Joe Goodman Dave who is familiar with the story, Collins was said to have noticed how hard it is for kids in Maitumbi to make it to school.

He decided to do something. Part of the comment reads: “Collins was born and brought up in Maitumbi where he did his primary and secondary school education. He was later offered admission into UNN to study political science. He was posted back to Minna for his NYSC. After some time in his boyhood environment, he noticed how hard it is for children around to go school.”

In a video also exclusively sent to Legit.ng by Joe Goodman Dave, Collins was seen negotiating the registration of the kids in the school.

Dave continued the story of how the plight of the kids touched Collins: “This made collins very concerned and decided to pay back to the community in his own little way out of the little the society have given him, by sponsoring the registration of four children (two boys and two g!rls) into GSS Maitumbi Minna.”