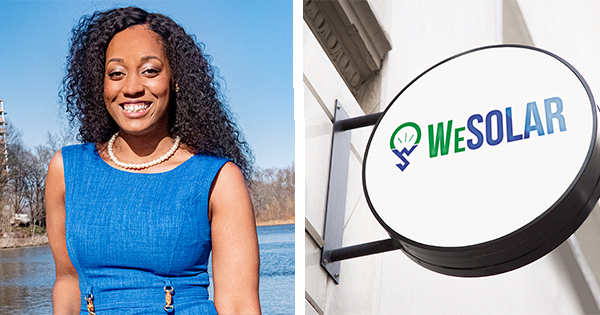 Kristal Hansley, a woman entrepreneur, and advocate for the use of solar power has made history after launching WeSolar – the first-ever Black woman-owned community solar energy company. She created the company to help families in underserved communities reduce their monthly utility bills.

Kristal said during her time leading the Community Affairs policy at Congresswoman Eleanor Norton’s office, Maryland passed new laws to increase the use of solar energy across the state. She saw how effectively solar could reduce the cost of electricity for households, and decided to get involved in the emerging world of community solar.

While working at Neighborhood Sun, a regional solar company in Maryland, Hansley has seen firsthand how solar energy helped thousands of low-to-moderate-income families save on their electricity expenses. That’s when she decided to establish her own company that is “dedicated specifically to opening community solar farms in neighborhoods like Baltimore.”

Hansley makes sure to prioritize communities wherein Black Americans have been facing problems with getting a fair share of energy from the government. The company has built solar farms to use on a local utility grid wherein consumers can choose whether to subscribe to blocks of electricity or buy a portion of the solar panel.

Moreover, as the first Black woman to launch a solar company, Hansley aims to disrupt the solar industry as well as the green energy industry, which is largely white male-dominated. With her effective leadership, WeSolar has been a fast-growing company that provides affordable solar energy to consumers, regardless of race, gender, or economic status.

Wiz, a 1-year-old Israeli cybersecurity startup founded by engineers who sold their last company to Microsoft, is now worth $1.7 billion

Five Essential Elements Of A Marketing Plan For A Small Business

Meet Helen Adeosun the founder and CEO of CareAcademy

The best phone cameras in 2020, tested by a pro photographer

Why open ecosystems are the future of app development