HomeStartupsKwik Delivery set to launch in Lagos after it raises $230k Seed...
StartupsFeatured 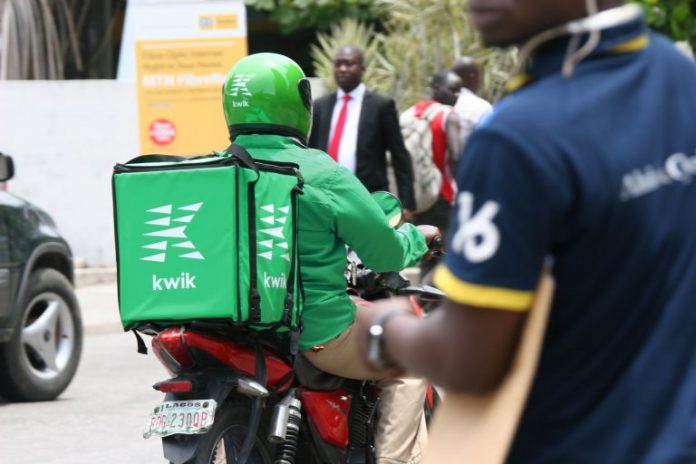 Based on the 2018 Logistics and Supply Chain Industry report which was released in March 2019, the value of the logistics sub-sector of the economy currently stands at N250 billion (~ US $700 million).

The report was presented by the Director General of the African Centre for Supply Chain, Dr Obiora Madu who pointed out that logistics is the fastest growing industry in the world and urged the Nigerian government to assist in growing the sub-sector in Nigeria.

The growth of the logistics industry can be pegged on the ever-burgeoning demand driven by e-commerce and convenience shopping trends which have brought about the new and greatest logistics challenge for organisations called “last-mile”. The term “last-mile” has emerged as a metaphor to describe the last leg of a product’s journey – from the fulfilment centre to the hands of the customer.

Across the African continent, last mile delivery is profoundly lacking and has been cited as one of the key challenges many retailers and e-commerce players face. Emerging e-commerce juggernauts like Jumia Group have had to build out their own last mile delivery service or contract existing traditional logistics firms like Aramex or DHL. The strategy has worked in some markets and floundered in others.

Traditional logistics and delivery firms were built on the back of a well thought out and mapped out address system. Yet, that is slowly beginning to change as more and more entrepreneurs are realising how entwined e-commerce, payments and logistics are and how long it would take to fully build out address systems across Africa.

Africa Delivery Technologies which trades as Kwik Delivery is the latest on the continent to go after the logistics and last mile delivery problem.

The startup which was founded a little over nine months ago – in July 2018 – has already put a team in place and is set to start operations at the end of May 2019 in Lagos, Nigeria.

“We are 4 co-founders (two French and two Nigerians) + a 10 persons IT team, but we are currently hiring our operations team,” wrote Romain Poirot-Lellig to Digest Africa.

However, they have not yet put together a team of riders – who are an essential part of a delivery business. But Romain maintained that they should have that sorted by the time they go live. “We aim to have at least 100 riders two months after launch. For the moment our system runs only in closed beta.”

“We plan to go live later this month. We developed an MVP which is strongly differentiated from the current last-mile offer in Nigeria”.

Kwik Delivery is coming to market with an estimated $330,000 in total equity investment raised. Part of this investment was contributed by Romain himself while the remainder – which was also a part of the startup’s seed round came from Marlinvest as well as a group of angel investors.

“The round was led by Jean-Pierre LUCAS’s MARLINVEST, a French investment company with significant experience in Nigeria, followed by some business angels who I have known for a long time in my previous lives as a financial advisor and tech business developer,” Romain wrote.

The $230,000 investment closed on March 29, 2019, while the other two rounds of $50,000 each were Romain’s personal investment. He also added that they have also taken in debt which he declined to disclose the amount but pointed out that it was “not a big amount”. “Its classic debt as opposed to convertible debt,” he wrote.

Nigeria already has existing logistics players including the more traditional ones like DHL as well as the upstarts. Among the upstarts, Kobo360, Africa Courier Express and Parcel-It are the easier ones to recognise. However, each of these has identified a particular vertical that they are tackling making it evident how complex and significant logistics is as an industry.

Elsewhere on the continent, there’s also logistics and delivery companies that are sprouting to solve the same last mile and delivery infrastructure challenge to enable digital commerce to grow.

In Uganda, Godel launched last year with a sole focus on last mile delivery with Jumia Uganda as one of its main clients. Pink Tie – which raised venture capital last year – has also focused on solving the fulfilment challenge as well as last mile delivery. The Uganda-based startup – founded by Japanese National Jay Cho – which operates a fleet of motorcycles and warehouses also counts Jumia Uganda among its clients. Pink Tie’s other clients in Uganda as of close of 2018 included KFC, Pizza Hut and other e-commerce players and retailers amongst its clients.

According to Digest Africa data, there are at least 54 companies active on the continent in the transport and logistics sector, these include ridesharing and hailing companies. To grow revenues, it is conceivable that companies which are already offering ride-hailing or sharing services could enter the last mile delivery space as they already have the core infrastructure and market knowledge. These include SafeBoda, Gokada, Halan and Swvl.

This is because the aforementioned ride-hailing or sharing solutions are more than equipped to build an online to an offline business model which has been central to the spurning out of ‘super-app’ based ventures like Grab and Go-Jek in the Asia Pacific. We have already seen it with SafeBoda testing the possibility of offering food delivery services in Kenya and it is rumoured that they will soon launch last mile delivery in Uganda.

Share
Facebook
Twitter
Pinterest
WhatsApp
Previous articleGhana Audit Service has launched a mobile app ‘Citizens-Eye’ to track the use of public funds in the country
Next articleOver 50,000 small and medium enterprise owners have benefited from Facebook’s digital skills training in Nigeria through its NG Hub
RELATED ARTICLES
Featured