Poland international Lewandowski set a new record for most Bundesliga goals in a calendar year with his 43rd goal in December, breaking the record set by Gerd Muller in 1972.

The 33-year-old, winner of the men’s award in 2020, also became the first player in Bundesliga history to finish top scorer in four consecutive seasons.

The 33-year-old, winner of the men’s award in 2020, also became the first player in Bundesliga history to finish top scorer in four consecutive seasons.

Lewandowski opens the scoring against Leverkusen with a very cheeky backheel flick from inside the area.

Chelsea’s Thomas Tuchel and Emma Hayes were crowned the Best coaches in the men’s and women’s game.

Tuchel steered the Blues to Champions League glory last season. The 48-year-old German replaced Frank Lampard at Stamford Bridge in January 2021 and had an immediate impact, starting his spell with a 14-game unbeaten run.

Tuchel said he was shocked to receive the award from world football’s governing body.

“It was a pretty normal day so far at the training centre, I’ve just come from training because we have a game [on Tuesday], but now you opened the envelope and said my name, it’s pretty surreal.

“I’m overwhelmed, I feel a bit uncomfortable actually. I enjoy the journey and I enjoy the club, it’s a good fit. The company on the journey is so good, so I’m grateful to have such supportive people around me, to feel so good in such a competitive club.

“We’ve lost a bit of track to Manchester City in the [Premier] League, but in other competitions we follow our goals still. We try to be the best versions of ourselves and try to compete at the highest level. We’ll try our best to fulfilo our dreams.”

Hayes, 45, guided the Blues to Women’s Super League, League Cup and FA Cup glory last season and steered the London side to the Champions League final.

She was named WSL manager of the season for her feats and was awarded an OBE in the New Year Honours for services to football.

Hayes said she was also taken aback at winning the accolade and paid tribute to her players and staff at Chelsea.

Speaking via video link at the ceremony, she said: “I’m completely shocked. It’s down to the players and the fantastic people who represent my work. Ultimately, the coach is only as good as the people they have around them.

“I’ve got brilliant people at Chelsea that have helped to support the team to the place we’re at. Honestly, I’m absolutely shocked right now.”

Chelsea goalkeeper Edouard Mendy was named men’s goalkeeper of the year for 2021 at the FIFA Best Football Awards.

Mendy, 29, is in his second season at the Premier League club after joining from Rennes in September 2020.

The Senegal international had been nominated alongside Italy and AC Milan’s Gianluigi Donnarumma and Germany and Bayern Munich’s Manuel Neuer.

Chile’s Christiane Endler, who joined Lyon from Paris Saint-Germain in June 2021, was named women’s goalkeeper of the year. 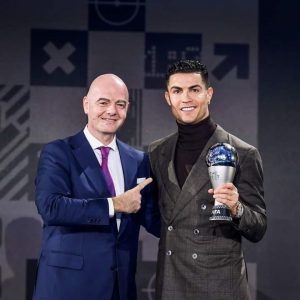 Two outstanding performances on the international stage where landmark goalscoring records were broken were also recognised.

FIFA president Gianni Infantino presented the awards to Ronaldo in-person and Christine Sinclair (virtually) at the ceremony at the Home of FIFA in Zurich.

Erik Lamela, who departed Tottenham for Sevilla in July 2021 – won the FIFA Puskas Award for his outrageous goal in the north London derby in March 2021. It is the second straight Puskas Award to be won for a goal scored in a Spurs shirt, after Heung-Min Son claimed the prize for his strike against Burnley last time around.

The Denmark men’s national team medical team and coaching staff won the FIFA Fair Play award for their heroics after Christian Eriksen collapsed during their match against Finland at Euro 2020,

Denmark and Finland supporters won the FIFA Fan award for their show of solidarity following Eriksen’s collapse. As the crowd waited for news on Eriksen’s health, fans of both teams banded together in an emotional tribute. Finnish fans chanted “Christian!” while Danish supporters responded with “Eriksen”.