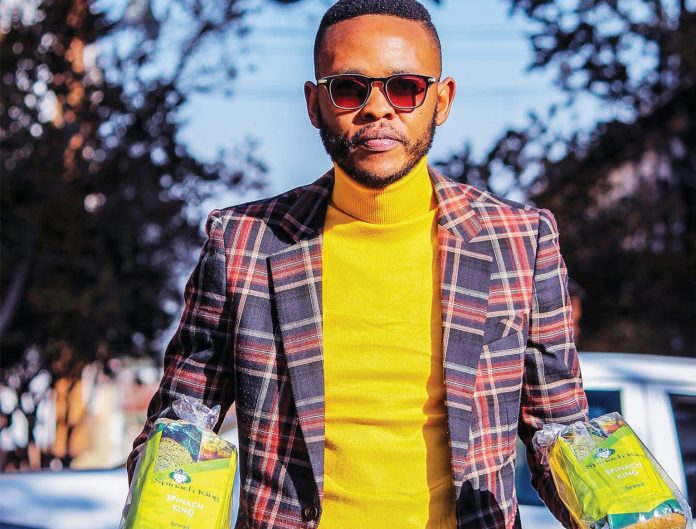 Creating a value chain to benefit business and residents in South Africa’s informal townships requires skill and perseverance, but that is the incredible success story of entrepreneur Lufefe Nomjana with his Spinach King franchise.

Nomjana has grown his business from an initial stake of R40 ($2), four bunches of spinach and the use of a neighbor’s oven in 2011, into a franchise operation that currently has five stores, and growing, and distributes products into selected retails outlets in the Western Cape and Gauteng provinces of South Africa.

And it is all built around the concept of nutritious eating and promoting a healthy lifestyle, something Nomjana believes is under-valued by township retailers.

“With Spinach King, we are not changing what people are eating, but providing a healthier version of it,” Lufefe Nomjana tells FORBES AFRICA. “For example, our spinach bread, our green burgers and sandwiches.

“We are not saying to people, don’t eat burgers. We are rather saying when you do, have it inside a gluten-free spinach roll and with a spinach smoothie instead of a soft drink.

“People assume that healthy eating is not important to residents in the townships, but that is not the case at all. Attitudes are changing and people are seeking healthier options.”

After the instant success of the business, Lufefe Nomjana was nominated by the United Nations for a scholarship at the University of Milan in Italy, where he enrolled for a course centered on nutrition and food sciences that he ultimately finished at the University of Cape Town.

It armed him with the skills to take his business to the next level, which was to open a retail outlet in Khayelitsha, Cape Town.

“It is a bakery from which we produce and supply our products, but also has a café and juice bar set-up for retail. That was in 2016 and it is still doing very well, even through these tough times with Covid-19.”

Soon afterwards, a Dutch student doing an MBA visited Cape Town and caught onto the concept, providing Nomjana with his first franchise opportunity.

“He loved it so much that he pitched it to the University of Amsterdam as an outlet for their students and we set that up in 2017. It was doing very well until Covid-19, when campuses were closed, but they pay royalty fees every six months and it has been a great learning curve to have the brand in another country.”

Nomjana also has an outlet at the Old Mutual head offices in Cape Town that service their 9,000 staff members, another success, and has just launched a fourth store in Philippi Village, also in the Mother City, a 6,000 square-meter business space where entrepreneurs can run their operations at a fraction of the cost of normal retail rental and overhead rates.

“We will be opening a fifth store in Langa (Cape Town) on September 24. That has been in the planning for two years, but is also a story that shows some of our challenges.

“All of our ingredients are organic and grown locally close to our stores. But for this, you need land and in Langa, it took some time to find the right space to grow our spinach and so on.

“Usually we speak to schools who have available land, or residents, who become part of our value chain.

“They grow the ingredients for us and we buy from them for our retail operations, but we also assist them in selling what we don’t use into retail stores. So it is a win-win, we get our ingredients at a good price, but we also help to keep our suppliers sustainable.

“We have got around 50 ‘gardens’ in the townships from where we source our ingredients directly and so this is a large value chain that not only benefits us as a business, but also the wider community.”

Lufefe Nomjana has also recently developed a distribution warehouse and café in Maboneng, Johannesburg, from where he now sells his products into Spar, Wellness Warehouse and other outlets in Gauteng.

“That will keep us busy for the rest of 2020,” he says. “But in 2021, the plan is to grow into the Eastern Cape and KwaZulu-Natal [also in South Africa], they have great potential.

“And, of course, ultimately we would like to franchise this concept into Africa in the coming years. Where you have the space to grow vegetables, you can turn that into a thriving business. What we have done with Spinach King is proof.