Man Converts Aeroplane Into Big and Long Car, Says He Spent N410.8m While Making It 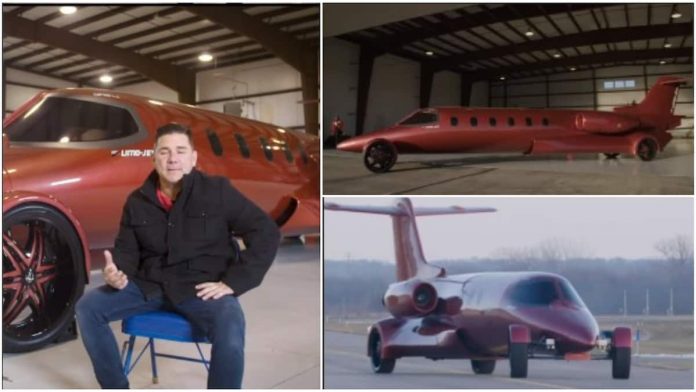 A man, Frank Deangelo, has amazed many online after he transformed a aeroplane into a vehicle that is 42ft long. In a video posted by Ridiculous Rides, the man explained the whole making process.

He said that that the plane fuselage was removed into a vehicle. He four whole vehicles were used in making the ride.

The man added that the craft is one of the few ones on the planet. Frank revealed that over $1 million was invested into the project.

Frank said that he has also had a passion for cars. Apart from it being 42ft long, the vehicle nicknamed Limo Jet is also 11ft and 6 inches high. It is literally is a roadable aeroplane.

The tyres are 28 inches high. He added that some of the lights used on the automobile came from Jeep, while others were custom-made.

The dashboard of the aeroplane car has four screens that show what the four different cameras outside are capturing.

Thelimo is started like a normal car. However, effects are added to make it look as if you are operating a plane and it is about to take off. Frank said that a difficult challenge his team faced was making the interior. He revealed that the shape of the plane posed a serious challenge and they had to make many things by hand.