HomeBillionairesMark Zuckerberg, Bill Gates, Elon Musk, and 6 of the other wealthiest...
Billionaires

Mark Zuckerberg, Bill Gates, Elon Musk, and 6 of the other wealthiest US billionaires reportedly lost a combined $14 billion in a single day 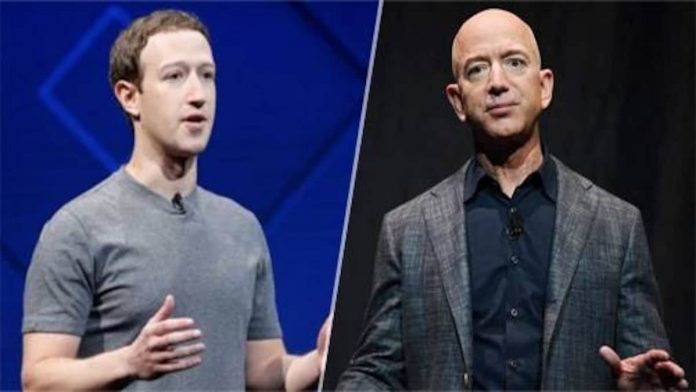 U.S. stock market indices plunged on Monday amid a resurgence in coronavirus cases, causing America’s ten wealthiest billionaires to shed billions of dollars from their fortunes.

A surge in coronavirus cases—both domestically and globally—weighed on market sentiment just eight days before the November presidential election. The United States saw a record surge in average daily coronavirus infections over the weekend, surpassing a previous record set in July, according to data from Johns Hopkins University.

Adding to market uncertainty are the stalled negotiations in Washington for another fiscal stimulus bill. Investors are hoping for signs of progress on another coronavirus relief package before the election, but stimulus talks have remained deadlocked. What’s more, hundreds of companies, including tech giants like Amazon and Google-parent Alphabet, are set to report quarterly earnings this week amid heightened market volatility ahead of the election.

See also: Mark Zuckerberg on how to be a multi-billionaire and not raise spoiled kids

The Dow Jones Industrial Average fell 650 points, or 2.3%, as of market close on Monday, while the S&P 500 slid 1.9% and the tech-heavy Nasdaq Composite dropped 1.6%. It was the Dow’s worst single-day drop since September 3.

Leading the way with the biggest drop among the top ten richest U.S. billionaires was Facebook CEO, Mark Zuckerberg. With Facebook’s stock down 2.7% on Monday, Zuckerberg shed $2.8 billion from his fortune, causing his net worth to drop to $101.8 billion. After starting Facebook in 2004, he still owns around 15% of the company.

The world’s richest person, Amazon founder, and CEO Jeff Bezos gained $159 million, raising his net worth to $188.8 billion. Bezos owns just over an 11% stake in Amazon, shares of which finished slightly higher on Monday despite the wider market sell-off.

Bill Gates, the world’s third-richest person who co-founded Microsoft in 1975, saw his fortune fall $1.7 billion—pushing his net worth down to $115.2 billion. While Gates has sold or given away much of his stake in Microsoft—he owns an estimated  1% of shares, which took a hit as the stock fell 2.8% on Monday. He’s also invested in a mix of other companies, including Canadian National Railway, John Deere, and Republic Services—all of which fell by over 2%.

Another former Microsoft executive, Steve Ballmer, also got $1.7 billion poorer on Monday, with his net worth falling to $71.8 billion amid the market sell-off. He owns an estimated 3.5% stake in Microsoft.

Tesla CEO Elon Musk, meanwhile, lost just $66 million, lowering his net worth to $93 billion. He owns a 21% stake in the electric-vehicle maker, which saw its stock fall up to 2.5% before recovering late in the day.

Renowned investor Warren Buffett, the ‘Oracle of Omaha,’ also saw his fortune take a hit on Monday. Buffett runs Berkshire Hathaway, which owns stakes in more than 60 companies including insurer Geico, battery maker Duracell, and restaurant chain Dairy Queen. Berkshire’s stock was down 2.1%, shaving $1.5 billion off of Buffett’s net worth, which is now $78.9 billion.

Larry Ellison, chief technology officer and co-founder of software giant Oracle, is also billions of dollars poorer. Ellison owns about 35% of Oracle—and with its stock down over 4% on Monday, his net worth fell by $2.6 billion, to $76.1 billion.

Google cofounders Larry Page and Sergey Brin dropped $2 billion and $1.9 billion, respectively, as Google’s stock fell by nearly 3%. Both controlling shareholders at Google-parent company Alphabet, Page has a $70.6 billion fortune, while Brin is worth $68.7 billion.

Rounding out the top ten is Walmart heiress Alice Walton. Her fortune dropped $635 million to $66.7 billion, as Walmart’s stock fell by 1.2%.