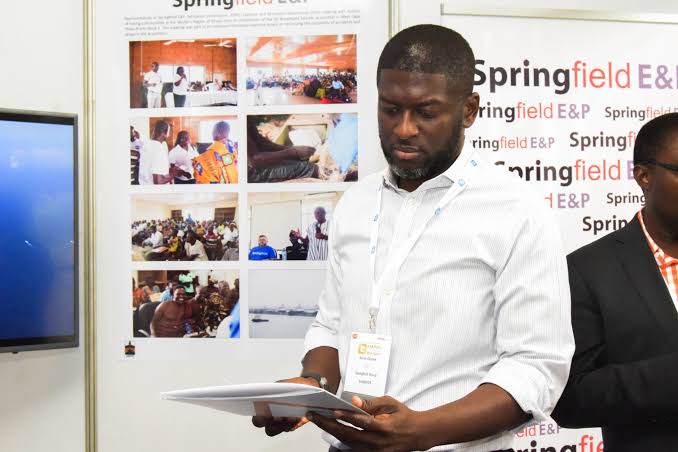 According to Forbes, his company Springfield Group, owns about 82% interest and operatorship in the West Cape Three Points Block 2 offshore Ghana (WCTP2).

Kevin Okyere is a 38 year-old entrepreneur and runs an energy conglomerate which generates $1 billion in revenues every year.

Okyere speaks about his journey, how he  invested $70 million in an oil-exploration company, and running the first homegrown Ghanaian company exploring for oil.

In his words, “We can’t afford to fail. I mean, we’re the first Ghanaian company to venture into oil exploration. We are in a unique position to set a precedent for indigenous companies looking to participate in the upstream sector. If we succeed, then we’d have sent a strong message – that Ghanaians are just as capable. That’s really important to me,” he says.

Okyere was born to a wealthy family in Ghana’s Ashanti region but that didn’t stop him from working to earn his own money.

His father was a construction, steel manufacturing and large-scale cocoa farming mogul.

At age 11, he says: “I would often put water in our chest freezers at home, and then sell the iced water to the supporters watching the games in the Stadium. Everyone used to call me ‘Eddie Murphy’ in reference to the movie, ‘Coming To America’. The movie was quite recent in Ghana at the time. They used to wonder why I was working when my father was wealthy”.

After his high school education in Ghana, Okyere went to George Mason University to study Accounting, and worked several jobs as he studied. “Anything legitimate that could earn me money, I took it,” he said.

“Unlike the U.S, Ghana was virgin territory for a lot of businesses. There were too many opportunities to explore in Ghana and I knew I could be more successful home than abroad. I knew I wanted to run my own business, but I wasn’t even sure of what I was going to do. My two previous jobs in the U.S had been in telecom so I was more inclined towards launching a business telecom sector,” he says.

In 2004, he moved to Ghana and garnered business experience working with his sister. A year later, he set up a telecoms company by bringing together a team of investors, that provided international call routing services for AT&T and several international calling card companies.

He later began to consider looking for other opportunities because “there was a lot of uncertainty with our core business – the call routing business. My contracts with our clients were revisited every year and I realized that my destiny was in the hand of the telecom companies who reserved the right to terminate my contract at any time.”

While still running Westland Alliance in 2006, he started working with a business acquaintance who supplied crude oil and condensates to the Tema refinery in Ghana. He then saw an opportunity in the lack of storage facilities for refined petroleum products.

Armed with enough cash from his business, he acquired land and began to build a storage facility.

When officials from Ghana’s National Petroleum Authority visited his construction project, they were so impressed that they asked him to apply for a Petroleum Product import license.

He did, and then began importing these products with his new company Springfield Energy in 2008.

Okyere also expanded his business to Nigeria and his company, Springfield Ashburton in partnership with BP PLC, was enlisted in the Nigerian National Petroleum Corporation (NNPC)‘s 2014/2015 Crude Oil Term Contract.

Okyere applied for the WCTP2 oil bloc in 2012, which he said has about 3.5 billion barrels of oil and 5 trillion cubic feet of gas.

He got the licence in 2016 and he said his company will be drilling for the first time in January 2019.

“For me, the most important reason we are pursuing this is to prove that Ghanaians can do it. We have a trading business that is doing well, and I could easily take the safe route to making more money by investing in real estate or something less tedious. But we look at ourselves as the indigenous pacesetters in this industry. If we are successful – and we will be, new local players will come up, and that’s very important for the ecosystem,” he says.