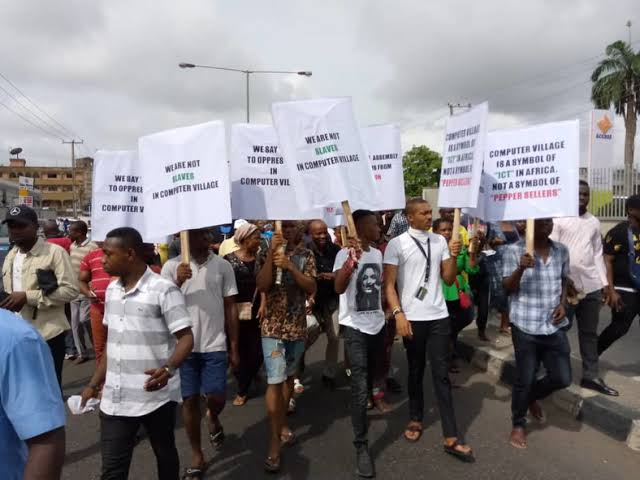 According to a close source, the newly appointed Iyaloja of Computer Village, Abisola Azeez Raolat, doesn’t fit the stereotype of a traditional market leader.

Abisola has a degree in Lingustics and graduated from the University of Benin in 1990.

This explains her ability to communicate very proficiently. But her journey to become leader of the market is what is remarkable.

However, Abisola used to have an office in the highbrow area of Victoria Island, Lagos where she was in the business of buying laptops overseas and selling locally.

She relocated to Ikeja as far back as 25 years ago, five years before Computer Village, Ikeja was formally set up in 1999.

So it didn’t come as a surprise when she mentioned that she was a foundation member of CAPDAN and also doubled as its secretary till the reformist leadership era.

“I am the secretary of the group that registered CAPDAN,” Abisola explains, “I was the major person whom God used to install the president of the association. Evidence of this can be found in the video of his electioneering campaign as I was in the forefront of it,” Abiola continues.

Even though the committee had an executive board, Abisola boasts of being the major negotiator with blue chip companies and banks on behalf of CAPDAN.

“As part of the executive board of CAPDAN, and apart from being the secretary of the group that registered the association, I am the one who goes out on behalf of the association to talk to the likes of Microsoft and other blue chip companies. I’m the one they send. So I have been in the system for long doing all of these, adding value to the business and community at large,” she adds.

As it stands, Abisola is ready to tackle various challenges in computer village, says she is fully aware of what the needs of the business community in Computer Village are.

“The challenges of the people here are many, but I can tell you that lack of funding for these shop owners sits somewhere at the top. I however equally know how to harness facilities that enhance the growth of businesses in Computer Village,” says Abisola.

Apparently there have been a protest across the ICT market hub against the move of Abisola’s installation as leader. Computer Village, Ikeja used to be under the leadership of the Computer and Allied Product Dealers Association of Nigeria (CAPDAN), headed by Ahmed Ojikutu.

The major concern of the protesters was the lack of connection between technology, which the hub is known for, and the planned installation of traditional market leaders. But as it stands Abisola looks good for the job and let’s see how it goes afterwards.