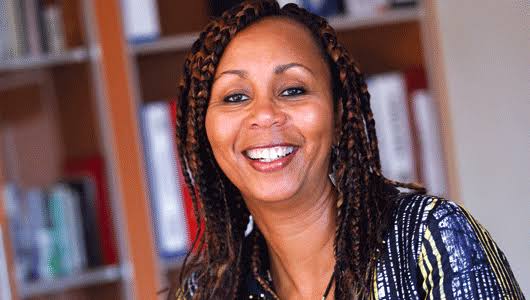 Anne Githuku-Shongwe is founder and Chief Executive Officer of Afroes Transformational Games – a company that builds mobile game-based learning platforms out of South Africa and Kenya.

Anne’s vision is to revolutionise learning in Africa with a focus on delivering positive Africa-focused mobile phone entertainment to the youth market across the continent.

Anne is an acclaimed public speaker on topics related to Social Innovation for the Public Good and Edu-tech and her past speaking engagements include TEDx Soweto; PICNIC, Amsterdam; Netexplo, Paris; Frontiers in Development, Washington DC; Games for Change, New York; Mobile Web Africa and East Africa; Africom and many more. Anne has also been recognised as one of the 15 Social Entrepreneurs of the Year, 2013 by Schwab Foundation/World Economic Forum; and was a Cartier Women’s Initiative 2010 finalist.

Back in 2008, Anne Githuku-Shongwe had one of those epiphanies in life that saw her end an illustrious 13-year career with the United Nations Development Programme to start an interactive digital media company. At the time, many of her colleagues thought she’d lost her mind. One of them even made a bet with her to the sum of $1 000 that she would be back at her UN desk within six months. Needless to say, that colleague lost the bet. Her motivation to succeed with her new venture was far more powerful, as her vision was to startup a company that could deliver positive Africa-focused mobile phone entertainment to young people across the continent.

Anne’s company, Afroes (the name comes from a play on the words African Heroes and Heroines), was inspired by conversations with her own children. She worried that they weren’t being exposed to any positive African media content and that their ideas and aspirations for Africa were being influenced by the Western media’s pervasively negative messages about the continent. She wanted to do something to change that. But it was whilst she observed her son excitedly started relating things he’d learned while playing the computer game, Civilisations, that she realised children who play computer games are a captive audience for anything you want to teach them. She knew from that point onwards that she needed to harness the power of computer games to deliver positive messages to African children.

The business challenge for Afroes was recognising that to reach mass numbers of children in Africa, mobile phones were the only viable medium to deliver computer games that could inspire and educate. Africa has the highest mobile growth rate in the world, with South Africa alone counting 6,3 million users aged between 10 and 24. However, not being a technology ‘geek’, Anne had to learn everything about computer gaming from scratch, in particular, how to develop highly engaging and appealing games specifically for mobile phones, and which were low cost and affordable for African children and their families to buy. After extensive research and the development of an innovative business plan for Afroes that could deliver the required low cost but high quality mobile games solution needed in the African market, she worked with local ‘Game Masters’ on a commission basis in different communities to sell SMS codes that children could use to download the games.

The launch of Afroes’ first two games in 2009 was incredibly successful. The first, Champ’s Chase, was developed as part of the Nelson Mandela Children’s Fund Champions for Children campaign to raise awareness of the potential risks facing children during the FIFA 2010 World Cup in Africa. The concept behind the game was for children to choose a character which then had to ‘save’ other children from potentially harmful situations and predators. The second game, TekaChamps, was a soccer game with a difference, set in the African townships that African children were very familiar with. The game was a practical example of how this type of mobile computer gaming could successfully be used to engage children in a fun and cool way to build a positive image of Africa.

Today, with over 450,000 users, Afroes has created a series of mobile games designed to shape new choices and stimulate challenging conversations for children and young people in Africa. MORABA, is an award winning mobile-game addressing difficult questions of gender-based violence and challenging the user to contemplate what she or he believes about sexual relations and sexual violence. This game provides valuable information to the user, empowering them to make informed choices. Another powerful game, HAKI: Chaguo Ni Lako (Justice: The Choice is Yours.) was designed to inform, inspire and empower Kenyan youth, and help them to make considered choices as they went to the polls on in 2013. Afroes has developed a design approach that engages the young mobile game users in the co-creation of the mobile application with partners including; the Nelson Mandela Childrens’ Fund and Child Rights partner organiations, UN Women and Gender-based violence stakeholders, Tuvuke Initiative for Peace and the Ford Foundation, as well as Nokia and Vodacom.

As a result of its innovative approach, Afroes has positively impacted lives and changed the choices and conversations amongst some of its young African users. The company plans to multiply and scale its efforts, convinced that its greatest ROI is to invest in unlocking the potential of Africa’s youth to shape new futures. Today, Afroes also offers tailored content for a fee to companies and organisations seeking to reach the youth market in an innovative and engaging way. One example of this is a partnership with an African bank to develop a digital game which teaches financial literacy. The company is also licencing its mobile content to Ministries of Education and NGOs throughout Africa, as well as in other underserved regions of the world.

As a start-up entrepreneur herself, Anne recognises the importance of mentorship and support. She applied for and was recently selected from 600 applicants across Africa as one of the continent’s three finalists in the Cartier Women’s Initiative Awards, a global programme to recognise and support female entrepreneurs. Recognition of this kind can be game-changing and she knows it. This proudly-African visionary also holds the title of Schwab Foundation Social Entrepreneur of the Year for 2013, and there’s no doubt that she’ll continue contributing significantly to the bright new future she envisages for her continent.