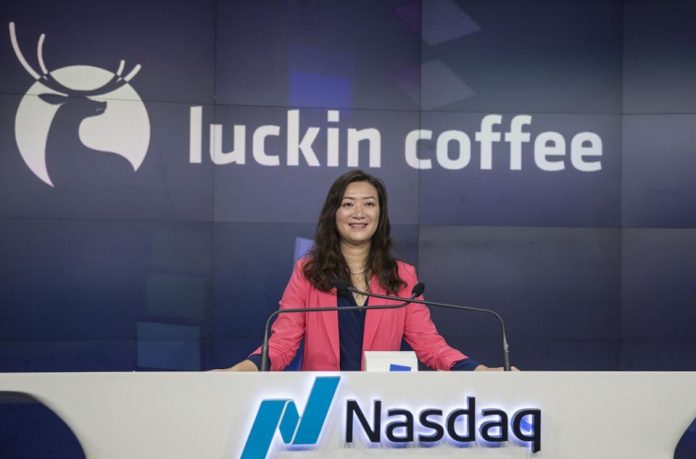 China’s hottest new coffee chain momentarily catapulted its founder into the billionaires club, less than 20 months after the startup opened its first trial location in Beijing.

Luckin Coffee, whose ascendance in the world’s second-largest economy has already minted its early investor Charles Zhengyao Lu a billionaire, opened trading shortly after 11 a.m. ET on Friday on New York’s Nasdaq. Though the company priced the shares at $17, early demand caused the stock to briefly hit $25.96, giving it a market capitalization of nearly $6 billion. Its founder, Jenny Zhiya Qian, owns almost 17% of the company, giving her a fortune of $1 billion for mere minutes before falling back down. She ended the day with a net worth of around $800 million.

Qian, who once worked as chief operating officer at Lu’s rental car company Car Inc. and ride-hailing startup UCar, launched Luckin Coffee in October 2017 after raising $150 million from Lu and others. The chain quickly made a name for itself thanks to its minimalist stores and quick service: 90% of its shops are pickup locations in high-traffic areas like office buildings and college campuses, and its in-app orders boast a delivery time of 18 minutes or less in major cities. It used the cost savings on stores to undercut Starbucks on pricing, and it appealed to the younger crowd with its mobile app.

By January 2019, Luckin Coffee had already served up some 90 million cups of coffee; by March, it had nearly 2,400 locations. It plans to reach 4,500 stores by the end of the year, surpassing Starbucks as the largest coffee chain in China. The American icon, which opened its first store in Beijing in 1999, has 3,600 locations in the country, though it plans to open 600 new stores annually through 2022 and has been expanding its delivery services.

So far, Qian has financed her ambition with venture capital, raising more than $700 million in private funding before taking Luckin public, according to PitchBook Data. The IPO, which raised more than $560 million, will only give her more ammunition as her firm continues its quest to become the top coffee chain in its home country.