Meet Esther Okade, The 10-year-old who is an undergraduate in a UK University 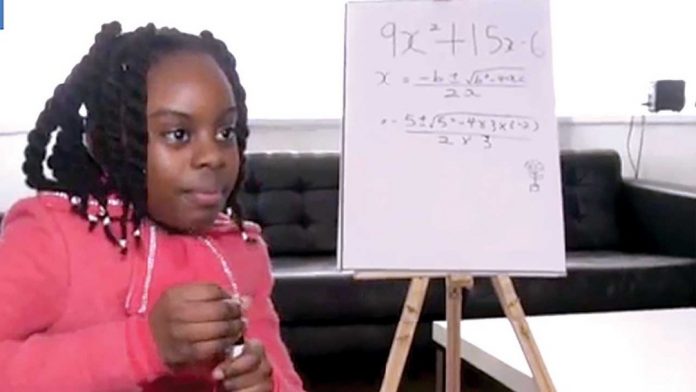 At first sight, Esther Okade looks like a normal 10-year-old. She loves dressing up as Elsa from ‘Frozen,’ playing with Barbie dolls and going to parks or shopping.

But what stands out the British-Nigerian youngster is that she’s also a university undergraduate.

Esther, from Walsall, an industrial town in the UK’s West Midlands region, is one of the country’s youngest college freshmen. The talented 10-year-old enrolled at the Open University, a UK-based distance learning college, in January and is already top of the class, having recently scored 100 per cent in an exam.

“It’s so interesting. It has the type of Maths I love. It’s real Maths — theories, complex numbers; all that type of stuff. It was super easy. My mum taught me in a nice way,” she giggles.“I want to finish the course in two years. Then I’m going to do my PhD in financial Maths when I’m 13. I want to have my own bank by the time I’m 15 because I like numbers and I like people and banking is a great way to help people,” she adds.

And in case people think her parents have pushed her into starting university early, Esther emphatically disagrees.“I actually wanted to start when I was seven. But my mum was like, ‘you’re too young, calm down.’” After three years of begging, the mother finally agreed to explore the idea.

A marvellous mathematical mind, Esther has always jumped ahead of her peers. She sat for her first Math GSCE exam, a British high school qualification, at Ounsdale High School in Wolverhampton at just six, where she received a C-grade. A year later, she outdid herself and got the A-grade she wanted. Last year, she scored a B-grade, when she sat for A-level Math exam.

Esther talks about running her own bank among other plans. She says she wants to be a millionaire. Her younger brother, Isiah, is following her footsteps. He is doing Calculus and advanced algebra. “Even when he was in my tummy, Esther was already teaching him,” the mother said.

Esther is among the youngest children to ever go to university in the UK. We believe in the potentials, talent and gifts of the kids out there and at Kids Entrepreneur, we are saying it is not too early to start.