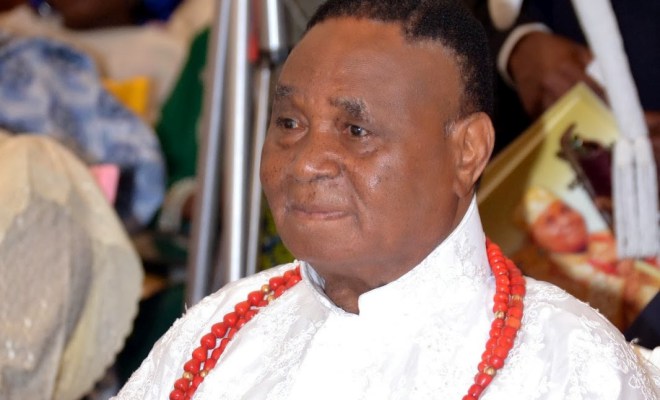 Gabriel Osawaru Igbinedion is a businessman and the Esama of the Benin Kingdom. The title Esama traditionally means the “Son of the people”, with responsibilities including assisting the poor in medial, monetary and private venture forms. He was suspended from taking part in palace activities in 2008.

He was born on September 11th, 1934 to the family of Chief Josiah Oviawe Igbinedion and Madam Okunozee Igbinedion at Okada Village, in the present Ovia North East Local Government Area of Edo State, Nigeria.

Gabriel is the only surviving child of his parents. His mother was the daughter of the Ihaza of Usen, a descendant of the Usen Royal family with a proud history. He lost his father died when he was just nine years old and inherited a house in the village and six cocoa plantations. His mother was a big trader, selling fish. He sold kerosene for seven pence for more than three years when he was a houseboy and also went to fetch firewood from the bush five times a week.

Gabriel Igbinedion started working at an early age and some of his earliest jobs were assisting his uncle in block moulding and trading rubber and timber in Benin. He served in Ogbomosho as a police officer in the early 1940s.

He also served as orderly to (the late Chief Obafemi) Awolowo’s wife. When he was deployed to Awolowo, Awo’s wife snatched him and he started driving her car. Motivated by a lot of factors, he left the Nigeria Police Force in 1963.The first of which had to do with the poor pay in the Force that could no longer sustain him and his family and also, service in the Nigeria Police Force did not quite satisfy the enthusiasm of the young Igbinedion.

Here were few serious challenges and the decision-taking process was such that initiatives from the lower ranks were hardly entertained. For any ambitious young man, and in this case for young Igbinedion with a mission, the Nigeria Police Force did not seem quite the right place.

Igbinedion joined the private sector in 1964 when he moved to Benin to become the regional sales manager of Leventis. He left Leventis in 1967 and established a motor sales and service firm, Mid-Motors which was partially funded with bank loans. In the 1970s, his firm began assembling Hino Trucks in the country and it is considered the first motor assembly plant in Nigeria. The firm obtained distributorships with Hino Motors, Yamaha, Nedion Fiat and Marcopolo buses.

Igbinedion later ventured into bottling with Okada dry with the help of Canada dry and Okada airlines which he launched in the early 1980s. He purchased his first private aircraft through Mr. Derek Lowe of Executive Jet Sales.

Read also: Meet Hakeem Belo-Osagie, The billionaire who started his career as a petroleum economist and later built successful businesses in the fields of energy, finance and telecoms

The HS125, was launched and blessed at Benin Airport by His Royal Majesty Omo N’Oba N’Edo, Uku Akpolokpolo, Omo N’Oba Erediuwa, the Oba of Benin. Thereafter, in 1983 he boldly recorded the first private initiative in the fledgling industry when he established Okada airline Ltd. His next venture was the purchase of a BAC 1-11 executive jet which was formerly owned by the deposed President Ferdinand Marcos of the Philippines.

He also owns expansive real estate in Benin where he purchased the numerous estates of deceased Bini chiefs. He also owns the ITV television station in Benin and formerly owned an oil license under Moncrieff Oil. In the early 1990s, he was the principal investor in Crown Merchant Bank.

Igbinedion is among the Nigerian class of politicians who holds the motto of any government in power, he was a member of the National Party of Nigeria during the second republic and lately and he has been affiliated with the People’s Democratic Party recently.

Igbinedion is today the Honourable Chancellor and Chairman of the Board of Regents of the first private University in Nigeria Igbinedion University Okada.

This position which he now occupies is a befitting tribute to his over 15 years of tenacious struggle to bring about a phenomenal development in education. It was a struggle of his life to which this relentless businessman selflessly committed enormous resources, time and energy.