Lee was said to have come from a not so wealthy background that could only afford to eat fish or meat twice a month, When he came in to Hong Kong at the the age of 20, he had less than HK$1000 on him but the ever relentless and determined fellow has been able to build a fortune for himself overtime majorly via investments in real estates. He also has investments in other sectors like oil & gas and banking & finance. He is currently the second richest man in Hong Kong and ranks no. 41 on Forbes list for the world’s richest men with an estimated net worth of about $27.2Billion. 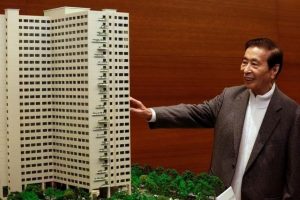 He also cofounded property developer Sun Hung Kai with Kwok Tak-Seng, the late father of Hong Kong’s billionaire Kwok brothers. Some of the company’s most notable development projects are; the Beverly Hills upper class private housing estate and the international finance center in both located in Hong Kong.

Lee shau-kee is well known for his boundless philanthropic acts and has immensely impacted many lives with his wealth and also contributed to the development of his homeland.

Also in 2005, he set up the Warmth Project, an RMB330m program in mainland China that has trained a million farmers and 10,000 village doctors. In a move that must have hurt for a property developer, in 2015 he gave away a big chunk of land to house Hong Kong’s biggest youth hostel in Yuen Long.