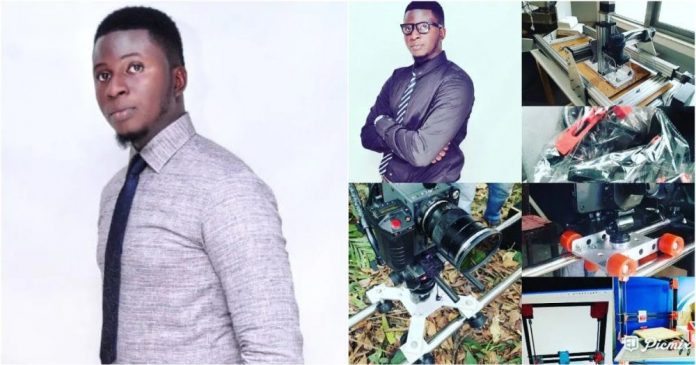 Samuel Oteke is a talented young man who has built technologies that can be used in many different fields.

One of his inventions is affordable film-making equipment for movie producers. As a moviemaker himself, Oteke wants to help other film-makers who can’t afford expensive equipment for making films.

“I designed a motion control systems for cinematography and film making. This system could control the pan and tilt movement of a camera with a joystick handheld unit wirelessly.

I also designed a slide function adapter for the unit to control the sliding motion. All of these are achieved with dc and Stepper motors, microcontrollers (Arduino) and h bridges,” as written on his blog.

Oteke was among 50 candidates who got selected to pitch at an event sponsored by General Electric. The selection was based on whether or not the solutions feasible for scalable. This event left him no disappointment as he could start his own platform to help other young people in the industry to make their own films by providing affordable equipment.

Oteke makes his social media presence and shares about his inventions on his Facebook. He shared photos of equipment he built and list them down. According to him, he wants to let other young people know that technology goes beyond laptops and mobile apps.