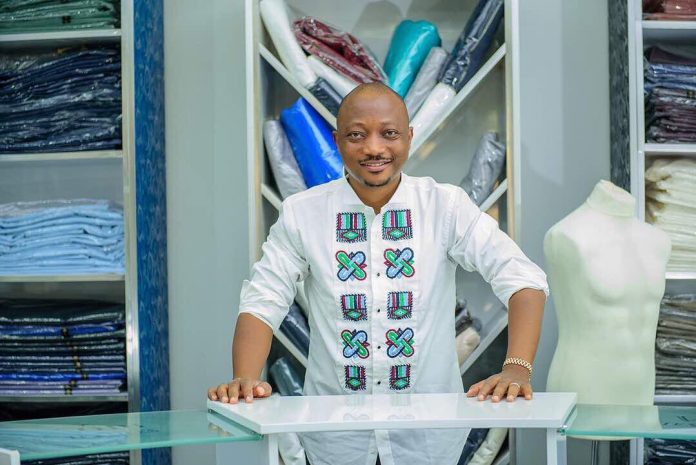 Seyi Adekunle (popularly known as Seyi Vodi) is a Fashion Enterpreneur, founder and chairman of VODI TAILORS, one of the largest male fashion label in Nigeria.

Seyi Vodi was born on July 19th in Lagos State, Nigeria, to Yoruba parents from Ile-Ife in Osun State.

Born into a polygamous family, Seyi’s father has about 50 children. He grew up in South West Nigeria where he attended basic school. Thereafter, he moved to the University of Maiduguri in Borno State, where he obtained a Bachelor’s degree in Geology in 1999.

In the early 2000s, he was posted to Akwa Ibom State in South-South, Nigeria, for his NYSC. It was during this time that he picked an interest in tailoring.

While having his NYSC, Seyi began sewing shirts and boxers for his fellow Corps members. In 2001, he registered his business as Testimony Fabrics but changed the name to Vodi in 2003. After failing a bank interview in 2002 but secured a job in 2003. He however abandoned it and decided to concentrate on his fashion trade.

Since 2001, Vodi Tailors has redefined style by using African fabrics to create unique designs, adding a contemporary twist to the traditional form, unifying the classical tenets of bespoke tailoring with strong vibrant colours and rich textures.

Vodi has sown for popular celebrities including Richard Mofe Damijo of Nollywood, and the comedian, Ayo Makun (AY).

Share
Facebook
Twitter
Pinterest
WhatsApp
Previous articleTen Nigerian startups have been selected to pitch for N1M in equity-free funding at the ‘Pitch2Win’ competition
Next articleThe Mobile Network Of The Future: What You Need To Know About Cybersecurity
RELATED ARTICLES
Featured