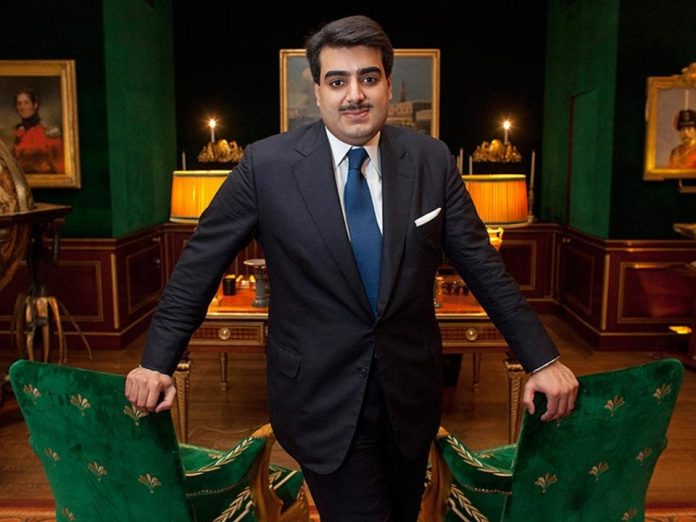 Shah Jahan, the fifth Mughal emperor, lived every part of life in excess—exquisite, extravagant excess. In the early 17th century, he ruled a kingdom stretching across what is now India and Pakistan from the Peacock Throne, a seat encrusted with diamonds, rubies, emeralds, sapphires and a 50-carat, pear-shaped pearl. He fathered more than a dozen children and took 11 wives. When his most beloved bride, Mumtaz Mahal, died in 1631, he commissioned a white-marble mausoleum for her. It took 22 years and more than 20,000 laborers to build her final resting place, known as the Taj Mahal.

In the centuries that followed, the glittering objects of Shah Jahan and other Mughal maharajahs were among the most coveted gems and precious artifacts in the world. And no treasure hunter amassed a more impressive collection than Sheikh Hamad bin Abdullah Al-Thani, a Qatari prince whose pieces range from 17th-century Mughal weapons to 21st-century Cartier jewels. Now, after decades of collecting, Sheik Al-Thani is putting more than 300 items up for sale in a highly anticipated auction at Christie’s on June 19.
“What distinguishes this auction from many of the other Indians sales that we have put together is the scale, the quality of the works on offer and the range. We have almost 4000 lots up for sale, and they range from $10,000 to $10 million,” says Rahul Kadakia, the auction house’s international head of jewelry. “Everything is the best of its kind. The best rubies. The best diamonds.”

Among the most prized lots in “Maharajas and Mughal Magnificence” is a 17th-century steel dagger made for Shah Jahan—and once owned by Samuel Morse (as in code)—encased in a jade hilt emblazoned with a swirl of Islamic script and topped by an ornately detailed bust of a cherub, a flourish likely influenced by the Mughals’ flourishing trade with Renaissance Europe. “The dagger is one of the high points,” says William Robinson, Christie’s director of Islamic art. “It’s also one of the most understated.” Many other pieces are the exact opposite. There is a chess set whose pieces are decorated with emeralds and rubies; the 10.5-carat Pink Golconda Diamond, drawn from the ancient mines of eastern India; and the Arcot II diamond, a 17.2-carat stone given to Britain’s Queen Charlotte in 1777 by the Nawab of Arcot. There is also an array of dazzling pendants, brooches, cuff links, necklaces, paintings, rings, bracelets, earrings, pocket watches, swords, powder horns and, of course, a bejeweled hookah. The sale is expected to bring tens of millions of dollars, and it may actually go into nine figures, possibly taking a run at becoming the largest jewelry sale of all time. Kadakia could only describe the auction’s massive projected estimate one way. “Like Elizabeth Taylor’s,” he says. He’s referring to the December 2011 event when the star’s family sold her jewelry for record-setting $160 million. One of the centerpieces: a ruby-and-gold Cartier chain containing the Taj Mahal Diamond, a 40th-birthday present from the actress’ fourth (and fifth) husband, Richard Burton. Hammered down for $8.9 million, the Taj Mahal Diamond stands as the most expensive Indian jewel ever sold at auction.
Naturally, there is plenty in the Al-Thani collection to rival Taylor’s, including another Cartier creation, a devant-de-corsage brooch ringed by four large diamonds—two measuring more than 20 carats—and a series of (slightly) smaller ones. It was made for De Beers director Solomon “Solly” Barnato Joel, who showed up at Cartier’s door in 1912 with the finest stones from his South African mines and commissioned the jeweler to fashion them into something beautiful. The brooch, exhibited at the Victoria and Albert Museum in 2017 and at Beijing’s Palace Museum a year later, is forecast to fetch between $10 to $15 million, the largest presale estimate in the Al-Thani auction.

The breadth of Al-Thani’s holdings is all the more impressive when you consider how quickly the sheikh amassed it. He started collecting only a decade ago.
In October 2009, a curator at London’s Victoria and Albert Museum, Amin Jaffer, invited Al-Thani to an exhibit he had put together, “Maharaja: The Splendour of India’s Royal Courts.” Jaffer extended the greeting on something of a whim. Al-Thani, a cousin of the Qatari emir, had never been to India. But he accepted Jaffer’s invitation and found himself entranced by the opulence and artistry on display.
Gold, rubies, emeralds and diamonds surrounded Al-Thani, but one thing stood out. “Without doubt the piece which most impressed me was the Mughal sapphire turban ornament given to Admiral Charles Watson by Nawab Mir Jafar,” the royal told ForbesLife in 2014. It was a fabulous item, a teardrop of emeralds and rubies arranged around an ocean-blue sapphire, and one with a clear provenance. (After the admiral’s death in 1757, his family held onto it until its sale to the V&A in 1981.) Al-Thani soon enlisted Jaffer to help him find other singular creations with indisputable lineages.

To that end, Al-Thani has spent millions buying up rarities around the world, some 6,000 items. Ivory plaques from ancient Mesopotamia, Ming Dynasty porcelain, Italian silver, a jade Mayan mask. “It’s an encyclopedic collection,” says Jaffer.
Some of Al-Thani’s possessions have been publicly displayed, including at a well-received exhibit at the Metropolitan Museum of Art in New York five years ago. The show was relatively small, only 63 items, but it left its curator, Navina Haidar, with a clear impression of what Al-Thani had assembled. “It is among the top few private collections in the world,” Haidar said in 2014.
Starting next year, Al-Thani plans to house a rotating exhibit in a permanent space at the Hotel de la Marine in Paris. Why sell off a portion of the collection before it finally gets a real home? Part of it is, undoubtedly, a way to raise funds to expand and diversify his holdings further. Left unsaid publicly—but clear among the golden spoons and ruby rings—is something else. With Paris caught up in a populist swell, it would not be the most opportune time for a foreign royal to establish a new museum in a historic French space and center it around the trappings of great wealth
“I think the diversity of the collection will be a revelation to many people,” Jaffer says. “In recent years we have loaned and published some of the most important historical works of art. But aside from the Indian jewels, we have only exhibited other pieces at the Forbidden City in Beijing and at the Château de Fontainebleau. The space in Paris will allow us to show the full depth and breadth of the Al-Thani Collection.”
Even those who may never place a bid on the Al-Thani collection can enter this Aladdin’s Cave of treasures in New York next week. Ahead of the sale, Christie’s is displaying the items at its Rockefeller Center headquarters. All of which will give you a little time to find a lamp with a genie to help finance a bid.