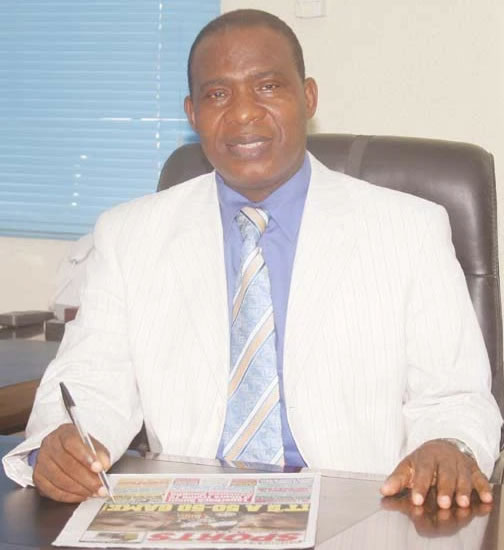 He is also the Publisher of Success Digest Extra, Climax Magazine and International Soccer Review. He was born on December 31st, 1950 in Osogbo, Osun state, Nigeria to Edo parents.

Born to Mr. Johnson and Mrs. Janet Obazu-Ojeagbase from Uzebba, Owan West local government in Edo state, the young Sunny grew up in a humble home. He attended St. Jame’s Primary School, Osogbo where he secured his First School Leaving certificate in 1962.

At seventeen, he enlisted into the Nigerian army, after working as an apprentice mechanic for two days, a trainee stenographer for six months and almost five years as a trainee printer. His joining the army was a desperate act to run away from poverty.

He is married to Esther Ojeagbase, together with whom he co-founded the Success Attitude Development Centre. The couple are also both pastors and are blessed with Children. In 2016, his second child and first son, Julius Babatunde Ojeagbase, revealed that the journalist rarely keeps friends and is a very private person.

Pool betting became his second pre-occupation in the military, a habit that nearly ruined his life. The turning point came when he found God and reading the book The Seven Laws of Success by Herbert W. Armstrong, founder of Worldwide Church of God. He voluntarily discharged from the army in 1978.

He in 1976 enrolled and studied from home for General Certificate of Education (GCE) and two correspondent courses in journalism at the age of 26 with a family to take care of. Of the four subjects entered in GCE, he made two papers (a credit in Economics and an A in English).

The A in English fired up his desire in sport journalism. He began to invest in any sports material he could lay his hand on and then to study the style and presentation of sports writers in the materials. His very first attempt as a sports writer was in June 1976, when he, as a freelancer, wrote a sports report for the Herald Newspaper, owned by the Kwara State Government.

He became a sports reporter working for Daily Times from April 1st, 1979, Concord Group of Newspapers from 1980 and the Guardian in 1983. Sometime in 1983, it dawned on him that at 33 he has not achieved much, with ten thousand naira annual salary, he felt he needed to do more. It was at this stage that he read two books from the shelve of one his mentors, Bishop Dr. George Amu, the General Overseer of GoodNews Miracle Bible Church.

As he read Think and Grow Rich by Napoleon Hill and Success Through A Positive Mental Attitude, co-authored by Hill and W. Clement Stone, he decided to reach for more. So in October 1984 after covering the Los Angeles Olympic Games, he decided to publish an all sports paper. To begin, he sold his cameras bought from the Olympics for four thousand naira and borrowed two thousand five hundred naira.

And so with six thousand five hundred naira, he started publishing the first Nigerian weekly sports newspaper Sports Souvenir with himself as the vendor selling the paper at National stadium, Lagos. A year later, he published Complete Football, the first Nigerian all-colour monthly football magazine and in 1995 he came out with Complete Sports, which is the first daily sports newspaper.

Ojeagbase has also authored several books like such bestsellers as How to Make It in Nigeria – Building Your Wealth from Ground Floor Up, How to Bullet Proof Yourself from Poverty, Ideas – The Starting Point of All True Riches etc.

He has touched the lives of so many Nigerians both young and old, his story has served as an inspiration to many who would have given up due to lack of a university or any other tertiary education qualification.

He brought about the idea of making money from whatever one can do. From snail farming to chalk production. From professional proofreading to soap making. From Bee keeping to carbon-black production. From building wealth in stock market to packaging for export. Name it, those hitherto not able to do anything, have suddenly found themselves being their own boss and employing others.

In 2014, he was awarded a lifetime achievement award at the first edition of the Dotcom awards.

In December 2015, Dr. Sunny Obazu-Ojeagbase, was made a Patron of the Edo Football Association at the maiden Edo FA awards night.