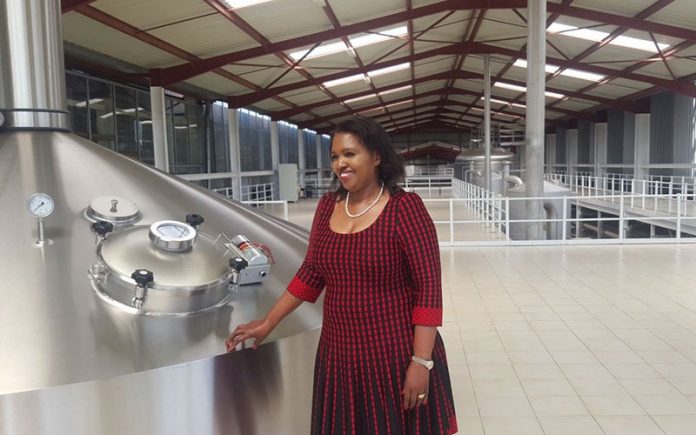 Tabitha Karanja is founder and CEO of Keroche Breweries. She is one of Kenya’s leading entrepreneurs, a remarkable trailblazer and an example of a woman made good against all the odds. It is now a kshs 1.5 billion ($17.6 million) turnover company with a growing local market share.

She has survived tough competition from East African Breweries and launched more brands after investing kshs 100 million ($1.2 million) in boosting production capacity. She is now seeking expansion in East and Central Africa and her dream is to cover the whole of Africa.

Tabitha chose to venture where none before her had dared. She took on an 87-year-old business monopoly and entered an industry with a deeply entrenched male gender stereotype. Tabitha broke the mould to become Kenya’s first home-grown beer and alcoholic drink manufacturer. Today, her company’s state-of-the-art production facility is targeting 20% of the Kenyan market.

For her enormous contribution in liberalizing the liqour market in Kenya, Tabitha was honored by President Mwai Kibaki in 2010 with a most significant Kenyan accolade – the Moran of the Order of the Burning Spear (M.B.S.) Award.

Tabitha was born in Kijabe, where she grew up in a family of ten children. As the first born, leadership came naturally to her.

She attended Bahati Girls Secondary School, and by the time she made her transition into work, her urge of going into business was too great to keep quiet. Tabitha would get her first taste of business, running a hardware shop with her husband.

However her heart was in manufacturing. She set out to do her research, in true Tabitha Karanja style; relentlessly and meticulously. She was soon able to identify a gap in Kenya’s alcohol industry. A need for a local beer which was not only affordable but of the highest quality.

Tabitha Karanja ventured where few before her had dared, taking on a decades-long business monopoly and overcoming gender stereotypes to become a major player in her country’s lucrative drinks industry.

As chief executive of Keroche Breweries, Tabitha Karanja has paved the way for many other female entrepreneurs in Kenya, a country where women are traditionally scarce in the boardrooms, and even rarer in million-dollar startups.

Against all odds, the 48-year-old entrepreneur has painstakingly turned the first Kenyan-owned brewery into a lucrative business. In the process, she had to succeed where others had tried and failed in the face of an entrenched monopoly: East African Breweries.

“People thought it was not possible to break the monopoly of the existing company that was there, because it has been there for 80 years,” says Karanja, who launched her company’s first beer product, called Summit, in 2008.

“People thought it was normal for us to have only one company in this country,” she adds. “I was too determined and said ‘no’ — I have traveled many other parts of the world and I saw there is no country that had only one brewery; people had many choices so I said that I have to go forward and let the people decide.”

Karanja’s journey in Kenya’s drinks industry started in 1997, when she started a fortified wine business aimed at the lower end of the market. For the next 10 years she came up against big names in Kenya’s wine industry, but in 2007, taxes imposed on alcohol manufacturing made it difficult to keep prices low.

Tabitha Karanja says the hikes made her product too expensive for her target customers, forcing her to stop producing fortified wine.

But instead of bowing out of the industry, Karanja came up with a new product.

“So there I thought again and said, ‘what do we do for this same market?’ And that is how we came up with ready-to-drink vodka. We make it ready-mixed to precision for moderate drinking,” she says. “Since then the market has always been opening up and has been growing into this new drink.”

Today, the company’s brand new, state-of-the-art factory produces 10,000 bottles of gin and ready-to-drink vodka, as well as 15,000 bottles of beer, per hour. Although the company only holds about 5% of the country’s market share, Karanja says the demand for Keroche’s products outweighs the supply.