HomeLeadershipMother inspires people, carries out paintwork as she backs her baby
Leadership

Mother inspires people, carries out paintwork as she backs her baby 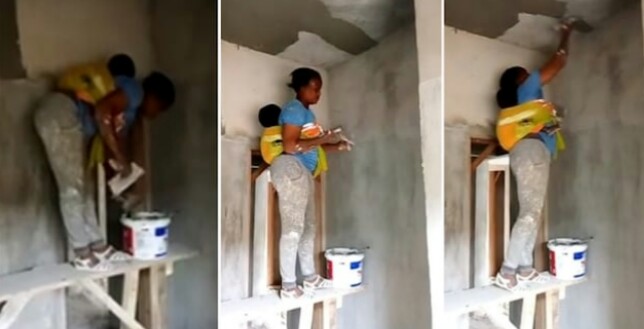 The sacrifices responsible mothers make are endless. A video of a female painter, Sognan Silla, who backed her child while working has gone viral.

In the video, she stood on a scaffold as she screeded the surface of a ceiling before she can apply paints on it. As at the time of writing this report, the video has over 400,000 views on Facebook. In her caption of the video, she praised courage and determination as she said that good things do not come knocking at the dock except one goes after them.

While many praised her for the courage as a mother, there were people who also thought that she is putting the child at risk in that position. In response to that, the woman said she only backed the child to make the video and to show that she is a hardworking mother.

Her caption for the video read: “Courage and determination, happiness doesn’t come knocking on the door, we seek it. for the child don’t worry it was to just make the video to show that I’m a mother otherwise I never work with the child. I never work without a combination”