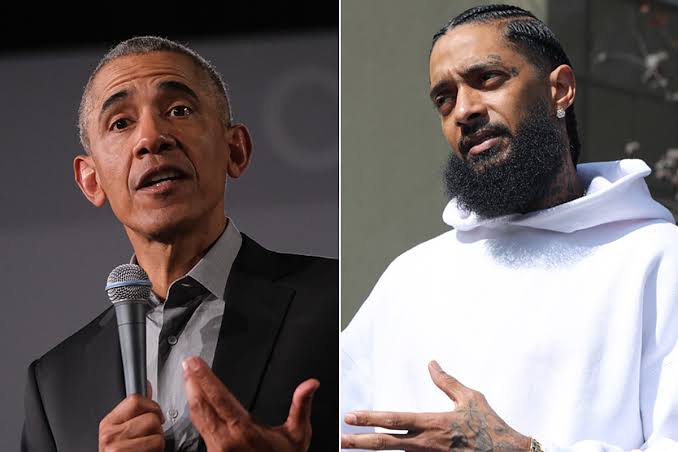 Forbes magazine had once reported, how the late music entrepreneur, Nipsey Hussle came into limelight by selling 1,000 copies of his mixtape and made up to $100,000 at a time when he wasn’t signed to any record label. Mymediaafrica.com reports.

Barack Obama had written a tribute letter for Nipsey Hussle, which Karen Civil read during the Memorial service at the Staples Center in Los Angeles.

The letter, which came as a surprise, was read after a moving performance by Marsha Ambrosius of Mariah Carey’s “Fly Like a Bird.”

At Nipsey’s memorial, Civil was dressed in an all white suit, with a blue handkerchief in the breast pocket.

When time came for her to spak during the memorial, in a shaky voice, Civil revealed that she was preparing to read words from former President Barack Obama, and the crowd went wild.

“Dear Friends and Family of Nipsey:

I’d never met Nipsey Hussle, but I’d heard some of his music through my daughters, and after his passing, I had the chance to learn more about his transformation and his community work.

“While most folks look at the Crensh neighborhood where he grew up and see only gangs, bullets and despair, Nipsey saw potential. He saw hope.

He saw a community that, even though its flaws, taught him to always keep going.

His voice to invest in that community rather than ignore it — to build a skills-training center and a coworking space in Crenshaw; to lift up the Eritrean-American community; to set an example for young people to follow — is a legacy worthy of celebration.

I hope his memory inspires more work in Crenshaw and communities like it.

Michelle and I send our sympathies to Lauren, Emani, Kross and the entire Asghedom family and to all those who loved Nipsey.”