Netting a hat-trick against Peru in the World Cup Qualifier took his total international goals to 64 Brazil goals, 13 behind Pele on 77 and two ahead of Ronaldo, whose last cap for his country came in 2011.

Brazil conceded early in the game through Andre Carrillo goal but went on to score four past Peru. Neymar equalized from the spot in the 28th minute after winning a penalty.

Peru went ahead again after 59 minutes when Renato Tapias’ 25-meter shot hit Rodrigo Caio before rolling into the net, only for Richarlison to equalize five minutes later.

Brazil went ahead again in the game with seven minutes left courtesy of another Neymar spot-kick. Peru’s Carlos Zambrano was sent off, and Neymar scored his 64th international goal when he tapped home in injury time to make it 4-2.

Brazil boss Tite, speaking after the win, was reluctant to compare Neymar with the country’s past stars, saying: “What I can say is Neymar has this unpredictability. “He is the bow and the arrow, he’s a player who both makes and takes chances. And he gets better and better, and more mature.” 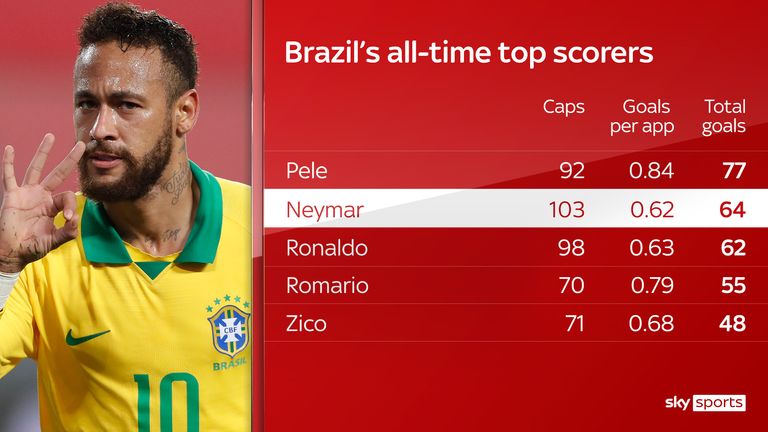 The 28-year old Neymar celebrated by holding up the No 9 with his hands in what appeared to be a tribute to Ronaldo, the former Barcelona, Real Madrid, and Corinthians striker.

Brazil is top of the group alongside Argentina after winning both of their opening matches, while Paraguay, who drew with Peru in their opener, are third on four points.

Ronaldo enjoyed a blistering career with both club and country. The former Real Madrid superstar clinched two World Cups and Copa America titles, along with a Confederation Cup, in an international career that lasted 17 years scoring a total of 62goals. As it stands, Neymar is now only behind Pele, who is widely regarded as the greatest ever to grace the sport. The three-time World Cup winner netted 77 times for Brazil.