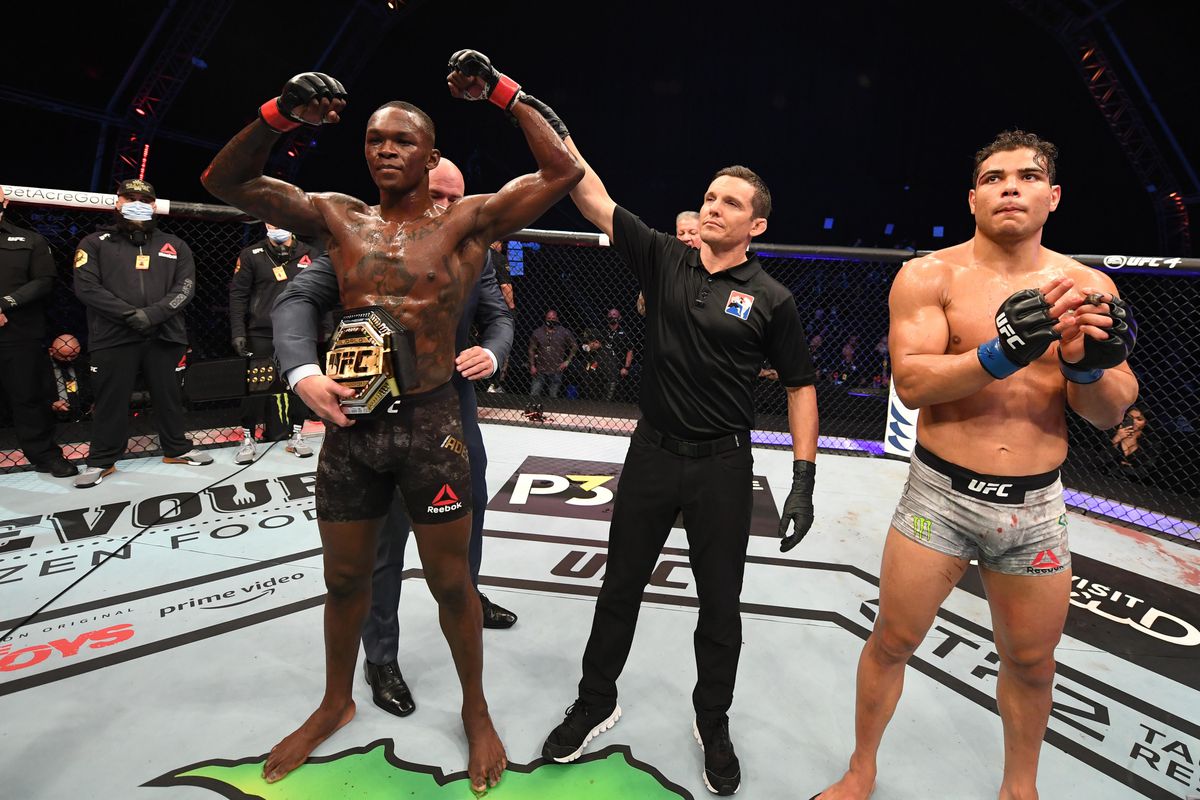 Israel Adesanya and Paulo Costa spent months trading verbal shots, but when it came time to step into the Octagon at UFC 253, the only meaningful blows that landed were those of the middleweight champion. After spending a full round beating up Costa’s lead leg, Adesanya finished the challenger with punches in the second round of the main event on Fight Island in Abu Dhabi.

Adesanya’s strategy was apparent early as he kept a distance and unloaded with kicks to Costa’s lead leg, alternating between kicks to the outside and stomp kicks to the knee. As Adesanya landed, Costa would respond with taunts before trying to cut off the cage. But Adesanya’s footwork was on-point, allowing him to slide away from any danger before resuming his leg attacks.

Costa looked to turn things up in Round 2, trying to pressure a bit more, but Adesanya continued to avoid the exchanges and began to mix in strikes to the head. A head kick from Adesanya opened a cut above Costa’s eye, and suddenly the challenger’s taunts stopped as he began to move backward.

As Costa finally got his wish and the two began to exchange in close quarters, Adesanya landed a glancing blow off Costa’s temple, sending him tumbling to the canvas. Adesanya wasted no time following Costa to the ground, unleashing a brutal flurry of strikes and forcing the referee to call a halt to the action at the 3:59 mark of Round 2.

“I still don’t like him. I don’t know him personally, I don’t wish he dies or anything, he’s alive, I let him be alive,” Adesanya said after the fight. “This is the game we play, this is violence and I told you guys that it was going to be violent and I said it, it’s going to be violent and it’s going to end fast and that’s what I did. I’m fresh, I can go next weekend, I can go anytime. I want to spend time with my family because it’s been a crazy year, so I want to go to spend time with my people.

“I’ve been telling you guys, but everyone thinks … like Roy Jones said, ‘Y’all must have forgotten’ because of what happened last time. I had to remind the world who’s the best.”

With the victory, Adesanya improved to 20-0 and dispatched a man many felt was his toughest challenger in the division. With options for fresh challenges dwindling after just two title defenses, Adesanya said he had already notified the man who could be next up of the opportunity ahead.

“I already DMed Jared Cannonier,” Adesanya said. “He’s a great dude, I like his energy. I said, ‘You beat Robert Whittaker and you’re next.’ If he beats Robert Whittaker, he’s next.”

In the co-main event, Jan Blachowicz stunned many with his second-round finish of Dominick Reyes to claim the vacant light heavyweight crown. Many thought that Reyes would be able to handle Blachowicz with ease after the former football star lost by controversial decisions to Jon Jones in February. But Blachowicz had other ideas, methodically working the body before landing some devastating power shots to the face and getting the stoppage.

CBS Sports was with you all evening bringing you results and analysis from UFC 253 on Fight Island.

Apple is quietly building a search engine to rival Google

Meet Etop Ikpe the Founder and CEO of Cars45

Jan Koum, from a cleaner to the founder of the world’s best messaging platform