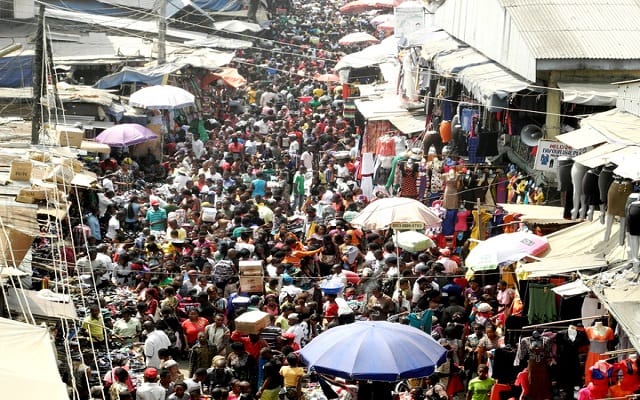 Bounded by the River Niger to the West and Fegge through Osumaru Road from the East, the Onitsha International Marine Market is said to be the largest market in West Africa based on geographical size and volume of goods.

It is based in the city of Onitsha, the commercial capital of Anambra State in Southeastern Nigeria and governed by one of the most revered traders associations on the continent, the Onitsha Market Traders Association (OMATA).
Most of the major import merchants from Eastern Nigeria have their head offices within the market.

The average traders in the area are known to bring at least six consignments of 40 feet containers of goods annually. Some of the other major importe do more than 200 consignments of 40 tonnes per year, with goods ranging from jewelry, clothing, household, industrial, and office equipment.
Onitsha is known for its bustling open-air markets and numerous multi-storey residential buildings.

It has a vibrant feel about it provided by the hustle and chatter of its inhabitants, who are as industrious as you would expect the typical South Easterner to be.
Perhaps, the greatest pride of this sprawling urban complex is its major center for commerce, the Onitsha main market.

It’s a restless mix of modest looking stores, makeshift kiosks and fairly decent buildings. This mass of structures, swarming with tens of thousands of people on a regular day is the heartbeat of the metropolis.
Interestingly, Onitsha owes much of its present commercial prowess to its being situated by the Niger River.

Although it had a market from its earliest day (dating back to the 16th Century), it didn’t become a chief trading post for the region until contacts with European business interests was established a few centuries later. It became a major port town in the colonial era. The British Royal Niger Company set up offices for its business in the city. Onitsha grew to become a transit point for trade along the Niger.

The market has since swelled in size, evolving into a mammoth tapestry of wooden and concrete structures. These buildings house the full range of businesses you will expect to find in a Nigeria Commercial District such as small time traders, wholesale dealers, large factories, corporate offices and the banks that provide them with financial services.
The item on sale at the market range from plain textile, clothing and shoe, to households items, cosmetics and pharmaceuticals.

Industrial goods such as plastics, aluminium are sold there too, as well as furniture and office equipment. These products are on display in specific sections or clusters of the market.
Furthermore, on weekdays the market’s major lanes and alleys have people streaming through them. Many are buyers and sellers from within the city.

There’s a large number of people from other states, as well as visitors from as far away Cameroon, Niger, Benin , Ghana, to mention but a few. They purchase sizable quantities of Onitsha’s wares and resell them in their own cities and countries.

Much of this trade is made possible by te Niger Bridge which links the city to the Southwest and indeed the rest of the coastal West Africa.
Additionally, Onitsha’s markets are grappling with formidable challenges. The city’s population has risen from a mere 62,000 in the early 1960s, to over one million today.

This rapid growth has put pressure on existing infrastructures, which hasn’t transformed to match the bulging population. The production centers and distribution struggle to modernize.

The security challenges in the North East have also stifle some of the trade coming in from that region and the countries adjoining it.

However, the market still flourishes. Event the city’s rampant expansion into neighbouring towns and villages presents an opportunity for positive growth. Specialized markets have sprung up at its edges, all of them inspired by the same sort of energy and verve that built the main market.

They aren’t rivaling the shiny modern shopping centers of Abuja or the modern industrial zones of Lagos; but they are gaining prominence in their own way.
In conclusion, the Onitsha Main Market is a raw gem sitting on kilometers of red and brown earth. Its people are shaping into something more reliable. It could become one of Africa’s most prized jewels if its cutting an polishing is done with care and concern for its well being and future thriving.