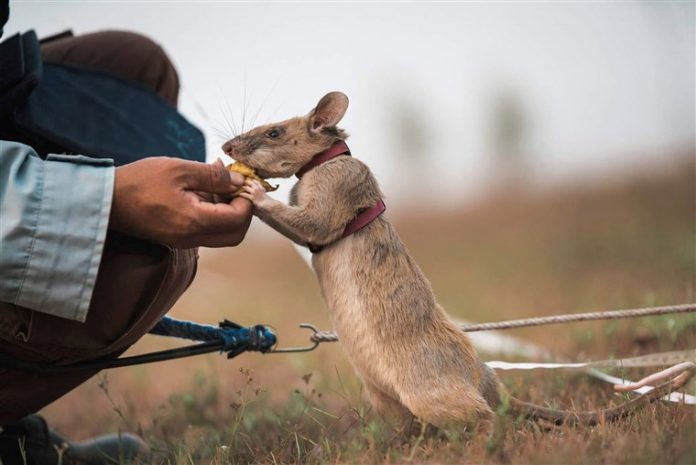 LONDON — They get a bad rep, especially for being dirty.

But one rat, Magawa redeemed his species on Friday becoming the first rodent to receive a gold medal for his work in sniffing out unexploded landmines and saving countless lives in Cambodia.

Magawa, a so-called “hero rat” was presented with a small blue collar and mini-gold medal by the British veterinary charity the People’s Dispensary for Sick Animals (PDSA) on Friday.

“Magawa’s work directly saves and changes the lives of men, women and children who are impacted by these landmines. Every discovery he makes reduces the risk of injury or death for local people,” PDSA director general Jan McLoughlin, said in a statement.

“We are thrilled to award him the PDSA Gold Medal.”

The African Giant-Pouched Rat was trained to detect landmines by Belgium-based charity APOPO.

Using an excellent sense of smell and memory, Magawa has discovered 39 landmines and 28 items of unexploded ordnance and can search an area the size of a tennis court in 30 minutes, something that would take a human with a metal detector up to four days, the charity said.

“Unlike metal detectors, the rats ignore scrap metal and only sniff out explosives making them fast and efficient landmine detectors,” said Christophe Cox, chief executive of APOPO, the non-profit organization which trained Magawa. It also trains the creatures to detect tuberculosis.

“This not only saves lives but returns much-needed safe land back to the communities as quickly and cost-effectively as possible,” Cox added.

It takes about nine months to train up rats like Magawa, APOPO said, adding that they can live up to eight years. The creatures are light-footed, so do not set off the landmines and no rat has yet been harmed during operations.

Wet-nosed Magawa was formally presented with his miniature medal in a virtual ceremony from London on Friday, becoming the first rat in the PDSA’s 77-year history to receive the honor. Former winners include police dogs, horses, pigeons and a cat.

An estimated 5 million landmines were laid in Cambodia during internal conflicts in the southeast Asian country between 1975 and 1998, mainly in the northern region along the Thai border — leaving agricultural land unsafe to farm and impacting communities and livelihoods.

Britain’s Princess Diana raised the global profile of landmines in a campaign in the southern African nation of Angola in 1997, when she stepped through a live minefield. Last year, her son Prince Harry walked in his late mother’s footsteps, visiting the same Angolan community that is now free of landmines following her work.