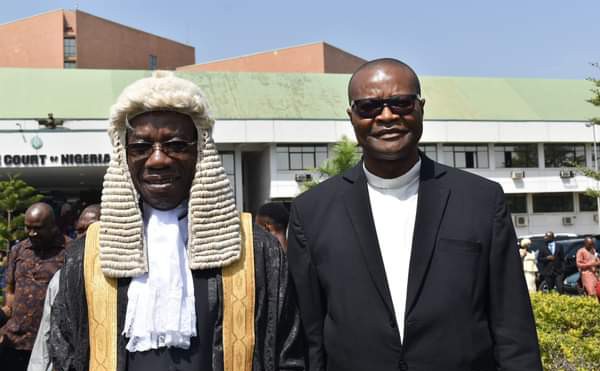 Rev. Fr. Edwin Obiorah has made history in the Catholic Priesthood by becoming the first Senior Advocate of Nigeria, (SAN) designate.

Obiorah and 71 others will be sworn in on Wednesday, December 8, 2021, at the Supreme Court, Abuja.

In 1987, the Catholic Bishop of Awka, Most Rev. Dr. Albert K. Obiefuna(Deceased) sent Edwin Obiorah to study Law in other to defend the poor and oppressed. This he did at the University of Nigeria, Enugu Campus(UNEC) where he graduated in 1990 with an LL.B Degree in Law and was subsequently called to the Nigerian Bar in 1991. Coming out with Second Class Upper Division in both instances. It is worthy to note at this point that Edwin Obiorah has always been outstanding in whatever he set his heart to. He is a born scholar.

He went further in 1992 to obtain his Masters in Law(LL.M) at the University of Lagos where he specialized in Land Law and Securities.

In 1995, he was awarded an LL.M Degree from Cornell University after an outstanding performance.

At Cornell University, it was an established principle that candidates could not apply to be admitted into the prestigious Doctor of Juristic Science(J.S.D) being offered by the school as every three years, the school usually chooses one of its past outstanding graduate students and recommend same to the graduate school of the University for acceptance into the J.S.D Professional study and research program.

In 1995, Cornell Law School recommended Edwin Obiorah to Cornell Graduate School for him to proceed with the J.S.D. degree program. In addition, the school awarded him a tuition scholarship of Forty-five thousand US dollars.
That same year, Edwin Obiorah became a fellow of Cornell Institute of African Development.

In December 1996, after distinguishing himself by completing with distinction the academic and professional requirements for the award of the much-coveted degree, Edwin Obiorah defended his dissertation titled ECO-JUSTICE: A New Paradigm in Environmental Jurisprudence.

The duration for this program was a minimum of three years but for the first time in its history, a time waiver was given to Edwin and he was able to defend his work.
In 1997, Cornell University conferred on Edwin Obiorah the rare degree of Doctor of Juristic Science(J.S.D.) and he became the first African to obtain the degree from Cornell University and the 19th person to receive the honor from the University since its establishment in the 18th Century.

Edwin Obiorah became the first person to formulate the principles of Eco-Justice which states in a nutshell that rights and life are autochthonous.

According to his work, every living creature has the inalienable right to try to survive a right which nature compels every nonhuman creature to obey in its ecosystem. Because of its originality and innovation, the monumental work was published by the United States Government in the library of congress and the book is on sale at Amazon- the world’s greatest online store.