The meeting attracted different stakeholders from research, government departments, development partners, local leadership, private sector food processors and seed multipliers, and farmers. The week showcased the importance of cassava in the country, looking at the progress made in cassava research and development plan, and laying common strategies for the future.

Farmers named new cassava varieties as part of the opening activities at the three-day event.  The farmers had tested the varieties in their farms and tasted different recipes from them in their homes.

Mrs Césarie Kantarama, Chairperson of Ingabo Syndicate that hosted the naming ceremony, said, “This naming event is very important for Rwandan cassava farmers. Like the way the government of Rwanda allows Rwandans and some influential international people to name baby gorillas, the named varieties are our ‘baby gorillas’ as cassava farmers.” She said this, referring to the new varieties’ anticipated impact on the farmers and Rwanda’s food and income security as a country.

Farmers named the new varieties according to their efficiency, production, and growth period. The names of the six varieties are Biseruka, Tegereza, Gikungu, Buryohe, Nsizebashonje, and Tebuka, respectively meaning, stand tall, just wait, get rich, taste sweet, can’t be hungry, and mature early. 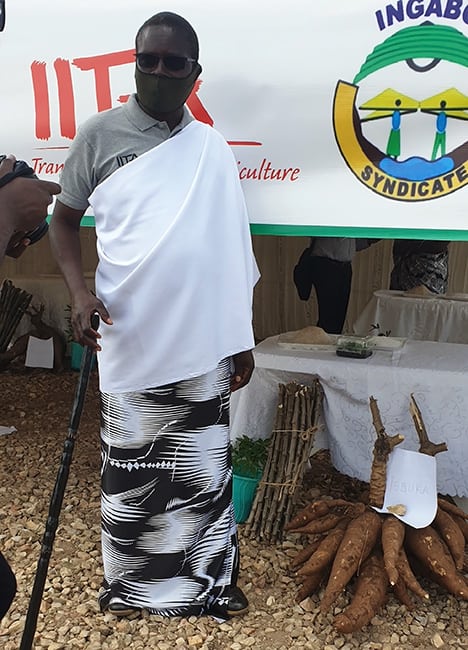 Vedaste Bapfakurera, who named the Buryohe (taste sweet) variety, said: “I tested this new variety and confirm that it is very high yielding within 12 months, has tasty boiled roots, leafy vegetables (isombe), and ubugali (paste mingled from cassava flour).”

“Our main purpose as RAB is to develop and avail improved varieties to farmers that are resistant to pests and diseases, mainly cassava brown streak disease (CBSD) and cassava mosaic disease (CMD). We have initiated this activity of naming the new varieties with Kinyarwanda names, so that farmers can easily identify and use them,” said Dr Athanase Nduwumuremyi, Head of the cassava program at RAB.

Rwanda currently cultivates about 200,000 hectares of cassava country-wide and an approximate average yield of 14.5 t/ha.

“With the new varieties

named and launched today, we hope to achieve increased production from 14.5 t/ha to between 30 and 40 t/ha. And the new varieties are promising since they are reported to be yielding between 35 and 45 t/ha,” Minister Ngabitsinze emphasized.

In 2007, the Government of Rwanda started the crop intensification program, with cassava among the prioritized crops. However, it has been facing many challenges, including two deadly diseases: CMD (locally known as Ububembe) and CBSD (locally known as Kabole), which have disrupted cassava production.

To address this, IITA partnered with RAB to develop improved cassava varieties resistant to both diseases. IITA has, through two collaborative projects, the IFAD-funded CBSD Control project and the Dutch government-funded Cassava Agribusiness Seed Systems, supported the introduction and adaptive testing of the most promising varieties and building capacities of the local research personnel and infrastructure. The new varieties include two developed by IITA, with some of the other four national program-bred varieties having parental origins from IITA materials introduced in the past.

“We are glad that IITA has contributed to this noble cause, to develop new, improved cassava varieties that are liked by farmers and tolerant to diseases that have in the recent past affected cassava production in Rwanda. Together with the cassava program at RAB, all these named varieties have gone through testing stages at research and farmers level to confirm that they are good and acceptable,” highlighted Silver Tumwegamire, IITA Cassava Breeder.