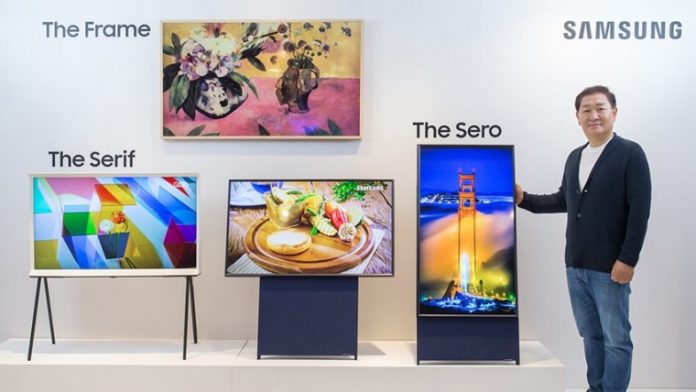 A lot of the technology we carry with us today could make us think that we are living in the future. A vertical TV likely isn’t one of the devices that would make people feel that way, but Samsung seems to think so. The Korean company today announced a new set of TVs for its home market, and one of them is actually meant to be used vertically.

The goal, it seems, is to cater to the younger audience, which is more used to mobile content, such as Snapchat and Instagram TV videos, or even mobile games. Yes, that means the focus of the TV, called The Sero, is to be used for screen mirroring from a phone, so you can enjoy the content on a bigger screen. The display can rotate to a traditional horizontal format when necessary, though, so there will at least still be some use for it outside of mobile content.

Aside from unique form factor, the TV also offers 4.1-channel audio with 60W speakers, and the screen size is just 43 inches. The Sero is set to cost ₩18.9 million in Korea (about $16,293), but there’s no word on an international release.

Alongside the vertical TV, Samsung also announced The Serif, a slightly more familiar horizontal TV that stands on legs that make it look somewhat like an art canvas. That’s because Samsung wants it to serve as frame for pictures or other art you may want to have in your house.