The Nigeria economy expanded by 3.4% in real terms in 2021, with an estimated value of N72.39 trillion, increasing from N70.01 trillion recorded in the previous year.

Nigeria’s real GDP recorded its fastest growth since 2014 in the review year, recovering from the covid-induced lockdown recession recorded in 2020. Meanwhile, the Agricultural sector continues to represent the largest sector of the largest African economy.

The agricultural sector contributed 25.9% to the aggregate real GDP of Nigeria, sliding downwards from 26.21% recorded in the previous year. Despite the decline, it was enough to contribute the largest value to Nigeria’s economy.

This is according to data from the National Bureau of Statistics on the Q4 2021 Gross Domestic Product report.

On a broader spectrum, the services sector contributed 53.56% to Nigeria’s GDP, an uptick compared to 52.44% recorded in the previous year, while the contribution of the industrial sector dropped to 20.56% from 21.36% recorded in 2020.

Considering the economic structure of the Nigerian economy, with concerted efforts being made to drive growth in some areas of the economy, some of which include the agriculture and trade sectors, it is imperative to regularly assess the contributions of the Nigerian sectors and their sub-sectors.

Hence, Nairametrics presents the ranking of the largest sectors in the Nigerian economy in the year 2021, with emphasis on sectors with over 5% contribution to the economy.

Nigeria’s Agricultural sector maintains the largest sector in the economy, contributing 25.9% to the real GDP, with an estimated value of N18.74 trillion in 2021. The sector grew by 2.1% year-on-year from N18.35 trillion recorded in the previous year.

However, the agricultural sector is very much below desired levels, despite numerous interventions by the CBN to develop the sector as agric import is still gulping a significant amount of our FX reserves and no significant inflow in terms of export earnings.

Nigeria’s trade sector expanded in the review year by 8.62% year-on-year in real terms in 2021, contributing 15.7% to the nation’s economy with a value of N11.36 trillion, making it the second-largest sector in the most populous black nation.

The Nigerian trade sector is poised to gain from the African Continental Free Trade Area, which kicked off in 2021 to help bolster trading activities amongst African nations. Data from the Central Bank also shows that Nigeria recorded its first trade surplus in Q4 2021 after enduring 8 consecutive quarters of negative trade balance.

The information and communication sector of the Nigerian economy contributed 15.5% to the aggregate real GDP with a value of N11.23 trillion in 2021, which represents a 6.55% expansion compared to N10.54 trillion recorded in the previous year.

The sector is majorly driven by the telecommunication sector, which is estimated at N9.15 trillion representing 81.5% of the total value of the information and communication sector. However, the sub-sector recorded its slowest growth in 14 quarters.

Not surprising, the sector houses major net-valued companies in the country, with the likes of MTN, Airtel, Glo, 9mobile amongst others reporting trillions of naira in annual revenue. 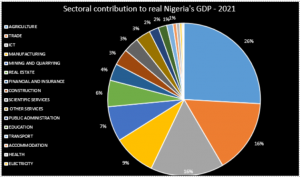 The manufacturing sector contributed 9% to the country’s real GDP with a value of N6.5 trillion, increasing by 3.35% year-on-year from N6.29 trillion recorded in the previous year. The sector has been largely disrupted by the double-figure contraction of the oil refining sub-sector of the economy.

The Nigerian manufacturing sector has 12 component sub-sectors, which include oil refining, cement manufacturing, food, textile production etc. The sector’s contribution was largely driven by the N3.18 trillion valuation of the food, beverages and tobacco sub-sector and the N1.32 trillion cement industry.

Others on the list of sectors with over 5% real GDP contribution include; Mining and quarrying (7.4%), and Real Estate (5.6%).