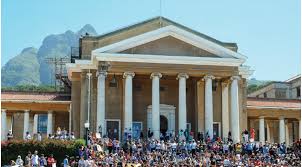 1. University of Cape Town
UCT’s campus is located at the foot of Table Mountain, offering spectacular views of Devil’s Peak and across the city.
The university was founded in 1829, earning its status as the oldest university in the country and the second oldest in Africa, behind the University of Sierra Leone founded two years earlier.
The main campus contains many teaching faculties, the main library and some halls of residence, and the middle and lower campuses are home to most of the student residences, sports facilities and some academic departments.
Academic departments are grouped into six faculties: the built environment, health sciences, commerce, engineering, humanities, science and law.
In addition, the university’s graduate business school runs independently from the commerce faculty.
UCT commits to social change through its “transformation” projects, which tackle issues like diversity, student opportunity, and behaviour.
Around 18 per cent of the student body are international.
2. University of the Witwatersrand
Wits University – as it is commonly known – is a public research university based in Johannesburg.
It was founded as a school of mining – the region is the most abundant with gold of any location worldwide.
The university grew significantly in the late 20th century and the campus expanding with many new buildings.
That time was also a period of protest against apartheid policies, and the university campus was fairly divided. Nonetheless, many prominent black leaders graduated from the university.
There are five campuses, with two joined by a walkway. The campuses are home to student residences, including female-only dorms, and academic departments.
Academic research and teaching is spread across five faculties: commerce, engineering and the built environment, health sciences, law and management, science and humanities.
Through the Wits Donald Gordon Medical Centre, the medical school trains more specialists than any other university in southern Africa.
Wits Disability Unit is a flagship centre ensuring higher education is accessible to disabled students, caregivers and others in need of special provisions.
3. Stellenbosch University
Stellenbosch University is located in South Africa’s western cape, not far from Cape Town.
The university town maintains Dutch colonial architecture and streets host an array of cafes, boutiques and galleries.
Among the university’s many achievements, it designed Africa’s first microsatellite in 1999.
Teaching at the university is split between four campuses, with the main one in Stellenbosch and the others nearby.
Students can write assignments and exams in both English and Afrikaans, even though the main language of instruction is Afrikaans. For postgraduate students, the language in classes is determined by the demographic of the class, and is usually English.
There are around 150 academic departments within 10 faculties, and many other research centres.
In addition to an extensive library system, the university has a conservatory with two concert halls, home of the Stellenbosch University Choir – the oldest South African choir.
4. University of KwaZulu-Natal
The youngest university in the top five was formed from a merger between the University of Natal and the University of Durban-Westville in 2004.
The university consists of four colleges spread across five campuses in the KwaZulu-Natal region.
The college of agriculture, engineering and science teaches all science subjects except for clinical and health studies, and the college of humanities teaches across arts, social sciences and humanities. The college of health sciences contains the medical school, and the college of law and management studies provides courses in law, business and management.
Notable alumni of the university include a number of public servants, activists, poets and innovators.
Researchers and students regularly engage in international collaborations with partners in other countries, aiming to tackle pressing challenges like AIDS, food security and high-tech developments.
5. Makerere University
Mekerere University Kampala (MUK) is the largest university in Uganda. It was established as a technical school in 1922 and has become one of the most prestigious universities in Africa.
The university is made up of nine colleges and one school, serving around 36,000 undergraduates and 4,000 postgraduates.
Many East African political figures have attended MUK, including presidents of Uganda, Tanzania, the Democratic Republic of the Congo and Kenya.
The university was also a centre for literary activity and culture that formed a nationalistic identity in independent Uganda.
Academic colleges function as faculties, spanning natural sciences, business and management, health sciences, education and engineering.
Halls of resident are generally split by gender, with one specific dorm for final year medical students.