We will Jail You if… Uganda Govt Tells 7 Years Old Rapper. 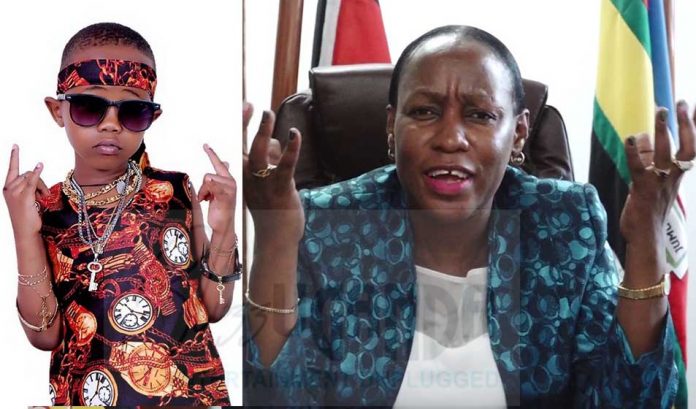 The Government of the East African country of Uganda, has told the country’s celebrity child rapper, to put down his microphone or risk going to jail. This was reveal by the country’s Youth Minister; Florence Nakiwala, who during her appearance on the Uganda’s NBS channel, warned that the child celebrity rapper risk juvenile imprisonment if he continue to rap.

Earlier, the Youth Minister had told the British media giant; BBC, that the Uganda’s labour laws forbids underage, that is persons less than 18 years, from engaging in any kind of labour.

Although across Africa, Child labour is a regular sight even in Nigeria. Kids engage in all sorts of buying and selling, businesses even at school hour. Clearly, the challenge has remained a major problem for African leaders to deal with and put an end to, reported BBC’s Catherine Byaruhanga, from Uganda’s capital.

In a sudden turn around, the Ugandan Youth Minister has moved to put an end to child’s labour insisting that the celebrity child’s rapper who is popularly known as Fresh Kid and whose real name is Patrick Ssenyonjo, has no time for school considering that the time he is suppose to be in school, he is usually working on his music thereby missing school and leaving his studies behind, meanwhile other children of his age were busy studying.

Although Fresh Kid’s manager has insisted that the celebrity kid attends school but also find time to work on his music. His manager; Francis Kamoga had told BBC that the child rapper merely performs on weekends, specifically on Saturdays and Sundays. In addition, he further hinted that the child rapper has only but had three songs, two shows and one music video, for the year. Therefore, he concluded that Fresh kid cannot be said to be working since he does not get paid.

Speaking on how he met Fresh Kid, his manager said, “I discovered him in a rural village miming some songs, brought him to the city and started paying his school fees”.

For the celebrity start boy, he believes that people look down on him because of his age, an issue he has taken time to address in his latest song where he called out people who accuse and berate him for not going to school.